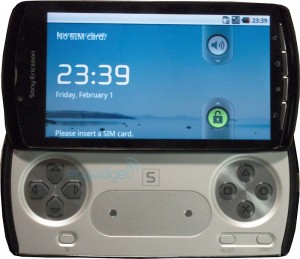 Engadget is reporting late this evening that they have spent some time with the device you see in the picture above.  According to them, this is the oft-rumored Sony Playstation Phone.  And it’s real.

The phone is said to be an early, buggy, prototype which should arrive in 2011 with a slight possibility of a 2010 release.  So far the hardware reads like today’s high-end Android handsets: 1GHz Qualcomm MSM8655 processor, 512MB RAM, 1GB ROM, screen size 3.7 to 4.1 inches, and microSD card slot.  Engadget believes we’ll see this launch with Gingerbread and a Sony marketplace for applications and we see no reason to argue here.  Be sure to check out Engadget’s two galleries for pictures for the Sony Playstation Phone.  More on this as it unfolds!

We’ll call it now.  The hype meter for this phone will hit 11.