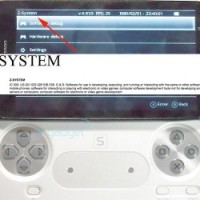 More rumors surrounding Android-based PlayStation Phone are starting to come together. New evidence of something called “Z-System. ” Code named “Zeus” Furthermore, these details were backed up by this VG247 report, who have also been told about the Zeus name via one of their sources. However, they also revealed that the PlayStation Phone will be based on existing tech, seen in the Playstation Portable, and not something completely built-up from scratch. An astute tipster notes that the term appears in the upper left of one of shots

seen at engadget (see pics below) which maps to a domain — z-system.com, naturally — that’s owned by Sony Ericsson. Turns out the company also holds trademarks for Z-System in the US and Benelux trademark offices (among others, presumably) that were filed (and approved) this year, and the filing category includes “software for interacting or playing with electronic or video games,” not hardware, so that strongly suggests we’re looking at a platform here. This could be the Playstation phone’s UI. It’s possible that this specific device will be called Z-System, but we are unsure at this time. Most likley the “Z system” is the underlying gaming platform that’ll bear that name or possibly a premium game store and set of software libraries that together will earn a device the Z-System badge. Only time will tell.

More news is expected but for right now that’s all you get! Stay informed at www.androidguys.com

YouTube TV has finally arrived on the PS5, Roku users still out of luck

HOT DEAL: Grab 3 years of PlayStation Plus for $90