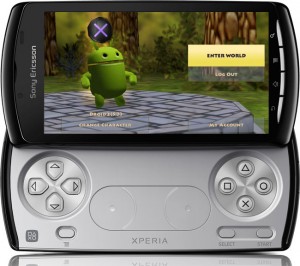 Spacetime Studios and “Bug Droid” were at it again during an E3 invasion in which they gave away over 11,000 Xperia Play themed vanity items to an in-game mob of Pocket Legend players. Sponsored by Sony Ericsson and Spacetime Studios, thousands of Pocket Legends players were treated to an online “Find the Droid” game in which players were given clues via social media outlets as to the in-game whereabouts of the “Droid” character. It then became a race against time for players to locate “Droid” and give him an in-game wave.

Every successful player received an Xperia PLAY button icon (X, O, Δ and □) to place over their character’s head. While these vanity items have no actual in-game benefit, it just goes to show you how much fun and player dedication can be had within the mobile gaming community.

This E3 spectacle wasn’t the first time Spacetime Studios released “Bug Droid” into the realm of Pocket Legends. His first introduction came shortly after the release of Pocket Legends for Android and his gift to successful adventurers came in the form of little green antennas. For some reason it makes me all warm and fuzzy inside when I see developers participate with their users in unique and fun ways such as this and it’s one of the many reasons why I myself am a devoted Pocket Legends player. Spacetime Studios’ overall commitment to its users, partners, and employees is exactly why Pocket Legends has remained the largest mobile MMO despite a number of competitors.

Be on the lookout for more to come from Spacetime Studios including the addition of Pocket Legends to the Xperia PLAY lineup, the release of two new campaigns, the raising of the level cap, and the introduction of player-run guilds. And let’s not forget the much anticipated Star Legends: The Blackstar Chronicles set to launch this summer.

So, did you get an Xperia PLAY button? What special item do you think “Droid” should give out next? Let us know what you think in the comments below and next time you’re playing Pocket Legends make sure to add me as a friend: LEVELM