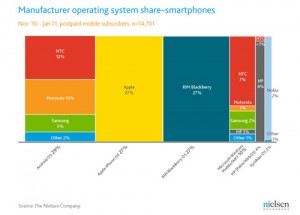 As many of you may know there has been a deadlock at the top here in the US for most popular smartphone OS between Android, iOS, and RIM; well according to a recent poll data release from Nielsen it seems that Android has now broken that tie and taken 29% of the US market, with both iOS and RIM tied at 27%.

The data was taken between November 2010 and January 2011, and it is also one of the first times that we have been able to actually see the breakdown of actual manufactures within the different OS ecosystems. For Android the breakdown is pretty much what I personally figured it would be with HTC running the table at 12% of all Android phones out there, Motorola comes in second with 10% and Samsung is in third with 5%. Another unique thing about the data released was that it also shows the different age groups using the different OS’s and again Android is winning in the youth category with 6% of the 18-24 year old age range.

While this is big news for Android this also has to be taken with a grain of salt, since the polling stopped just before the iPhone4 launched for Verizon, and there has been some signs that people have been switching to iPhone from both Android and RIM since its launch on Big Red. One thing that this poll does not do is put to rest all the flame wars that happen between the different OS fanboys, maybe it actually just adds fuel to the fire. 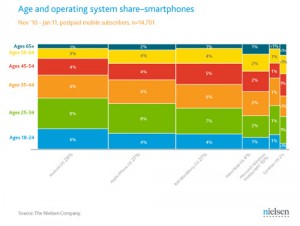