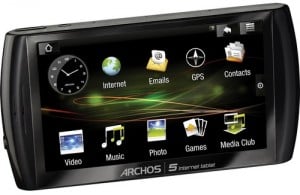 Here are some stream-of-consciousness thoughts on the Archos 5 Internet Tablet that arrived today at CommonsWare‘s secret mountain lair.

For what it’s worth, I obtained this device for experimenting with WVGA Android applications, to help advise developers on how to deal with larger screen sizes. I am not necessarily intending on using this device as an ordinary consumer would.