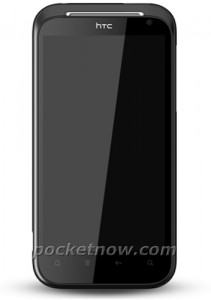 We’re not exactly sure how they do it so often, but Pocketnow has obtained another handset press shot ahead of any formal announcement.  What you’re looking at here is the first real look at the HTC Vigor, an Android smart phone expected to hit Verizon in the coming weeks. Details are said to include a dual-core 1.5GHz processor, 4G LTE support, and the HTC’s first HD (1280×720) display. Other rumors suggest this will launch with Beats by Dr. Dre technology, somewhat of a hot topic lately. While some outlets are whispering that this phone could be called the Thunderbolt 2, Pocketnow hears this handset will maintain the Vigor name.

We’re only a few days away from seeing what HTC has up their sleeves for U.S. consumers. The handset maker is rumored to be unveiling a number of new products which could also include the Amaze 4G, HTC Rhyme, and/or HTC Bass.