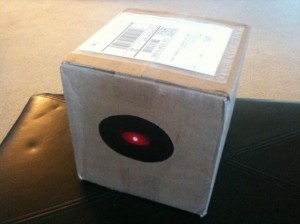 Some promotional material for the Droid Does campaign is starting to make its rounds throughout the tech and mobile community. Although a firm date has not been set yet as to when to expect the pre-sale or sale date, the rumors are starting to swirl around both October 28th and November 6th.

The guys at MobileCrunch were sent a mystery box which had all the makings of a Droid on the outside.Â  Upon opening it a few minutes later, Greg learned that he wasn’t going to find the Droid he was looking for.Â  Somewhere, someone has a great, albeit mean, sense of humor.Â  We won’t spoil the video, you have to watch it.

The 11.09 we’re starting to see on the promotional material most likely means November 2009 and not specifically the 9th.Â  This would line up with the commercial that’s currently getting plenty of airtime.

As it stands, we’re likely to see a mini-site or pre-sale page launch when the countdown expires on October 28th.Â  We’ll probably also find out when the actual sale date is on or around that time.Â  Stick around, we’ll be among the first to share the findings as they trickle in!