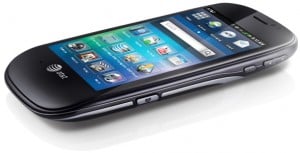 Announced back in March around the time of CES, the Dell Aero has finally gone on sale.  For $99 and a two-year service agreement, customers can pick up the handset which features a 3.5-inch display, 5-megapixel camera, and removable 2GB MicroSD card.  Although it’s powered by a 624Mhz Marvell processor, the Aero sadly runs Android 1.5 (Cupcake).  Dell touts the potential 40,000 applications available, yet those of us with Android 2.1 or 2.2 know there are closer to 100,000 out there.  Having said that, this guy isn’t the worst you could do with your money – It’s still better than any feature phone.  The problem really lies in the fact that it hurts Android as a whole when phones are released in August of 2010 that have a May 2009 version under the hood.