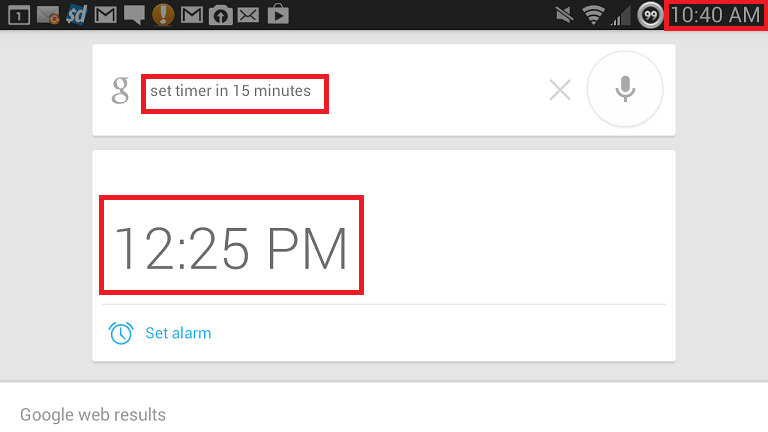 Google Now is a wonderful tool for Android users. It’s sleek, intuitive, and gets things done for you much faster than you could do them manually. However, users should be aware of a small bug in Now.

When using the “remind me”, “set timer”, or “set alarm” function, Google Now has been having a small bug – not so small, however, if you’re really depending on those alarms and reminders. It seems that, when the user gives Google Now a time span in which to set an alarm or reminder, the app is occasionally adding a zero into the calculation for time. For example: saying “remind me xyz in 3 minutes” could result in an alarm in 30 minutes, or saying “set an alarm in 15 minutes” could give you an alarm in 105 minutes. It’s shown in the video below:

It should be noted that most users are saying the “remind me” bug has been resolved in the latest Google Now. However, this writer was able to reproduce the bug exactly on the latest version of Now by using the “set an alarm in” and “set timer in” commands: “set an alarm in 15 minutes’ actually set an alarm for 105 minutes later. I did verify I was running the most recent version of the Google app from the Play Store. The screenshot from that exact command is below:

For now, we suggest both keeping an eye on your alarms when they’re being set, and making sure you always have the most recent version of Google from the Play Store.

Be sure to let us know below if you’re experiencing the same issues, or if yours seems to be resolved.