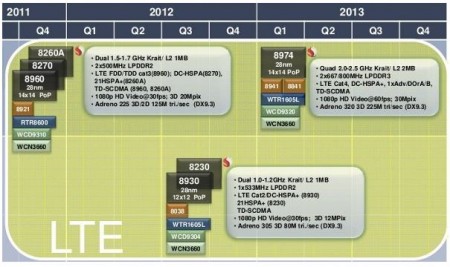 A leaked Qualcomm roadmap highlighting future chipsets and their possible release times made a brief appearance before ultimately being pulled. As with all leaked documents, things are subject to change so try not to take this information as “absolute truth” if you know what I mean. According to the leaked roadmap we can expect the dual-core, LTE, HSPA, and HSPA+ chips by the end of Q4 2011. These chips will be clocked at about 1.5 and 1.7 GHz and will feature an Adreno 225 GPU.

Next up will be Qualcomm’s lower chipset model which is set for a 2012 Q3/Q4 release and will feature core clock speeds between 1-1.2 GHz while sporting an Adreno 305 GPU. Last but not least, the highly anticipated quad-core chips are set to arrive around Q1 of 2013 but I’m betting we’ll see them sooner than that. With clock speeds between 2-2.5 GHz and an Adreno 320 I can’t wait to start rocking some console quality games while burning a hole through my battery.

What do you guys think of Qualcomm’s time frame? Are they moving too slow or just erring on the side of caution? Will they be a solid competitor or get left in the dust? Take a look at the full specs in the pics below then sound off in the comments or on our Facebook wall.