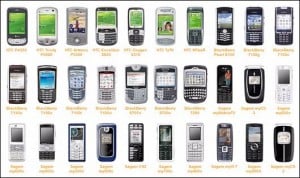 Not too long ago cell phones were having a race to the top. Every week it seemed like one cell phone company was trying to out do another one. While the competition was great on the outside as it sped up development of getting really good and useful smartphones, it was also frustrating. Smartphone frequently bought a cell phone that was considered “top of the line” just to find out about a week or two later that the new Galaxy or iPhone just came out and beat your new phone hands down.

Those days are over. Most cell phone companies are on an equal playing field. There is little to differentiate between a Samsung or HTC. You can even stretch it and claim besides the operating system that there isn’t much difference between Apple and Samsung. The differences between manufacturers is little anymore mostly falling down into implementation of technology rather than what technology it has that will make or break the device.

While the big companies have been racing for the top there has been a race to the bottom as well. Companies like verykool (Infosonic from San Diego) and Blu amongst others are creating awesome devices for small budgets. These companies are all fighting it out to see who can become the king of cheap devices.

The devices that they are creating aren’t that bad either. They aren’t the cheap, “generic” devices that were created a few years ago. These are actually really decent phones with pretty decent specs. Recently I had the honor to review the Spark II made my verykool and to my amazement this device was probably one of the best sub $400 devices I ever laid my hands on.

This device was a quad-core device with a super bright screen that had a sleek touch of sophistication in the design. Somehow this device only costs $169.00 on Amazon. That is amazing considering that it not only came with the usual extras of a charger and headphones but also a screen protector, a case, and did I mention that it had a dual camera flash for the rear camera and a flash for the front facing selfie camera? Really? All of that for $169?

It isn’t just verykool who is doing this, others are too. They are jamming the most specs and biggest bang for your buck into the smallest package available. The race is on, especially in developing countries where phones with these specs are a hot ticket item. In the long run it will be very interesting to see how this race to the bottom of the pricing barrel will impact the pricing for those flagships on the top of the pricing food chain.