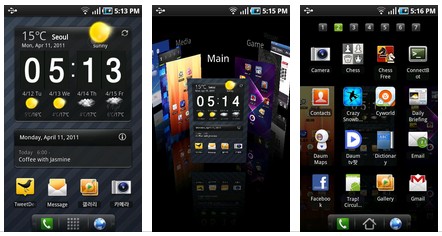 Like the looks of the SPB Shell 3D we profiled last week, but hesitant about dropping $15 on it? If so, a new home replacement app called Regina 3D Launcher is definitely worth a look.

Regina 3D Launcher may not have quite the polish of SPB Shell 3D, but it offers a lot of the same kind of eye candy along with a few features that SPB doesn’t have. And its big advantage is that it’s a whole lot cheaper: it’s free.

In addition to the launcher itself, you’ll want to download four add-ons: a to-do list widget, a weather add-on for the clock widget, a “weather server” app that powers the weather widget, and the default theme, which includes several wallpapers. You’ll find links to all at the end of this post. Can you use it on its own? Sure, but it’s a bit bare bones. Is it kind of a hassle to have to download all five apps? Sure, but again, it’s all free. And aside from the core app and default theme, the rest are all tiny.

In addition to the to-do and weather widgets, Regina also comes with a few other optimized widgets: calendar/agenda,  a clock with really swank animations, missed calls/texts, and a task manager that shows running apps and free memory. All except the clock flip over in a really attractive way to access settings.

Regina runs pretty smoothly on my Nexus One. It’s worth reading through the documentation included to see all you can customize. Take a look at the developer’s demo video: