As 2015 came and went with wheels on our cars *and* on our hoverboards, there came with it a growing sense from a few generations that this was simply not the futuristic world we were promised.

Nevermind the wonders of the Hitchhiker’s Guide we call the internet, we’re overwhelmingly usingit to complain about the lack of the *real* future we were promised. Considering R2-D2’s freestanding holograms are limited to gigantic machines with teensy-tinsy results, the pico-projector market seemed poised to give us *some* measure of living in the amazing future we technically still inhabit. 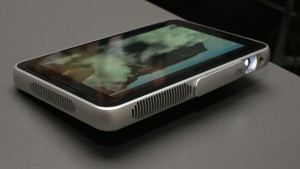 As of 2016, the promises of 2005, of a pico in every phone, seem a distant memory. We were promised easy public display of all our digital content, and instead had to settle for large screens with ultra-retinal resolution.

In a way, that reveals all the challenges this imaginative idea embodies, and explains why the tech itself is still so difficult to find. China enjoys a modest market for phone/pico devices, while the rest of the world has adopted stand-alone pico-projectors. These devices are generally much larger than any smartphone you’ll find, but are clearly aiming to appeal to those who would otherwise be lugging around a full-size projector.

In short, the idea appeals to most anyone with a smartphone, but the current technology only has a place in niche markets. Truly, this is tech bound to some variation of Moore’s Law. Advancements in displays seen on modern phones, particularly their wildly-increasing resolutions, are building a foundation for higher-resolution projectors of smaller and smaller size. The developments of new LED technology to illuminate those displays is helping to establish newer, smaller, brighter lights. The kind that pico-projectors absolutely require if they hope to become anything more than a pretty-good niche feature.

The energy-saving benefits of LEDs are well-known. However, their small size has been a bit misleading in what their capacity actually is. Sure, if you jam a hundred of them into a lightbulb attachment, you’ll be amazed by how bright it is. The trouble being, you’ll still be hard-pressed to find a single-unit LED that can truly put out the light needed to project an image. For example, that super-bright tactical flashlight you’re eyeing is very likely using an LED cluster, alongside some bulky optics, to create a convincingly bright light for you to use. No matter how many times you’re dazzled by the result, asking a single unit to project the lights and darks of a digital image convincingly still results in a severely-compromised experience. 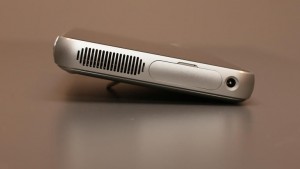 This is the other reason pico-projectors have increasingly separated themselves from being attached to smartphones. Compromises to both the phone and the projector are significant enough to create a device that isn’t very appealing as either. The form factor is thrown off by the extra size, and a device already prone to overheating now has a very hot bundle of lights directly inside it. The reviews for the Samsung Galaxy Beam 2 praised the fun options provided by the projector in optimal circumstances, though with a 640×360 resolution, it wasn’t terribly well-suited to the professional use it clearly aspires towards.

Which brings us back to the best pico-projectors available in 2016…a line of very small projectors, a great deal larger than anything you would want to fit into a smartphone. Some are still palm-sized, yet pack in full HD and even 3D. While others are about half the size of the phone. The market is still testing the waters, but we’re still years away from finding one in the latest Android smartphone.