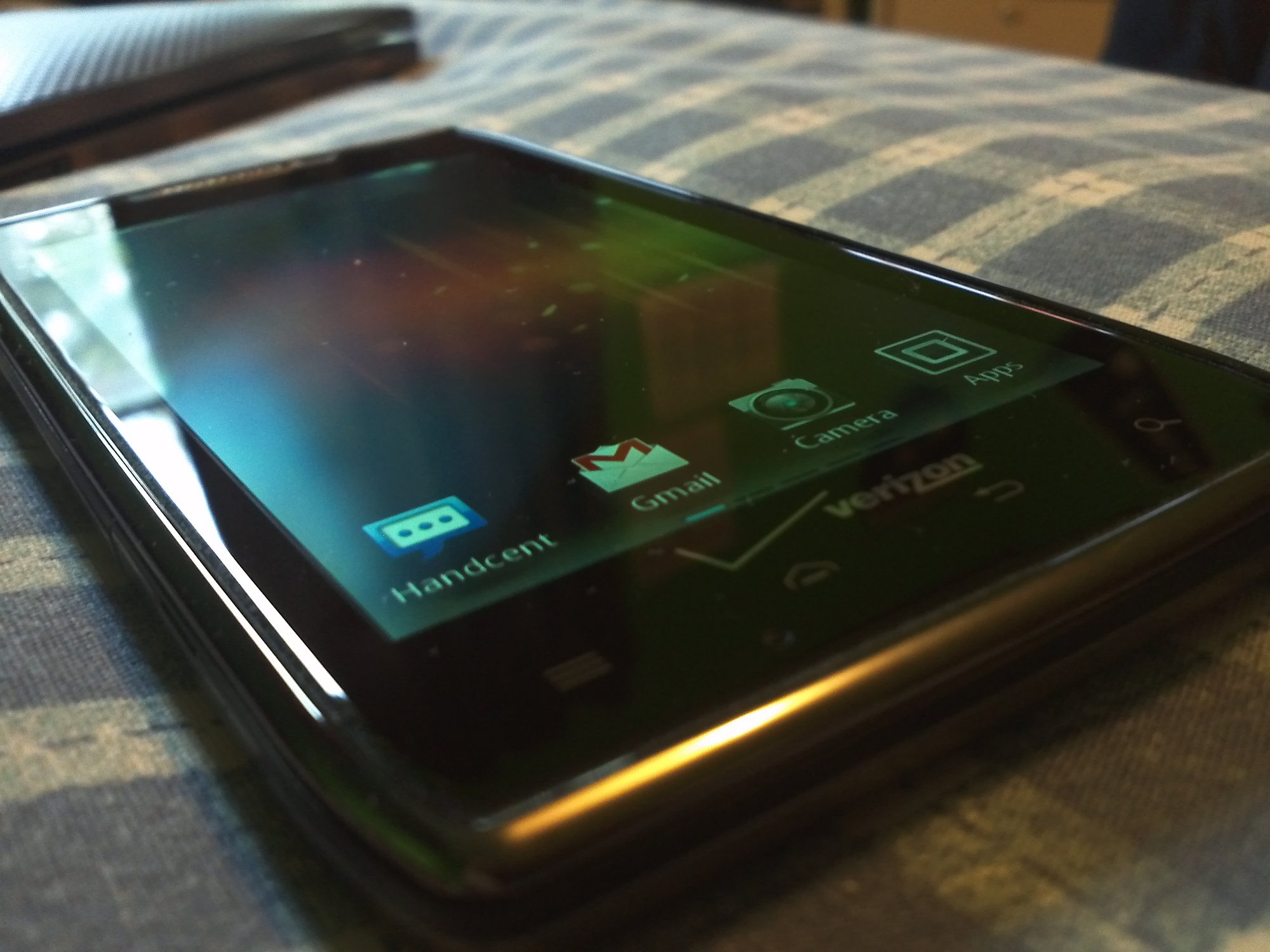 If you’re like me, you use your device heavily, which tends to drain the battery. Extended batteries are always an option, but they typically add noticeable thickness to a device. Motorola is seeking to solve this issue with the Droid Razr Maxx, a newer variant of the Droid Razr, known for its incredibly thin profile. The folks at Verizon were kind enough to send over a review unit, and I’ve been using it as my daily device for just over a week. So without further ado, the Droid Razr Maxx…

A quick tour of the device gives a bit of information, such as the gorgeous 4.3-inch, 540 x 960 Super AMOLED display, capacitive buttons at the bottom, and the microSIM and MicroSD card slots nicely concealed on the left side.

Up top, we can see the miniHDMI port, and the MicroUSB charging/data port, as well as a 3.5mm headset jack. On the right, there’s the power/lock button, and the volume rocker.

Looking at the rear of the device, the first noticeable thing is the Kevlar back that we first saw on the Droid Razr. Near the top, we can see an 8MP camera with 1080p HD video capture, an LED flash, and the speaker. 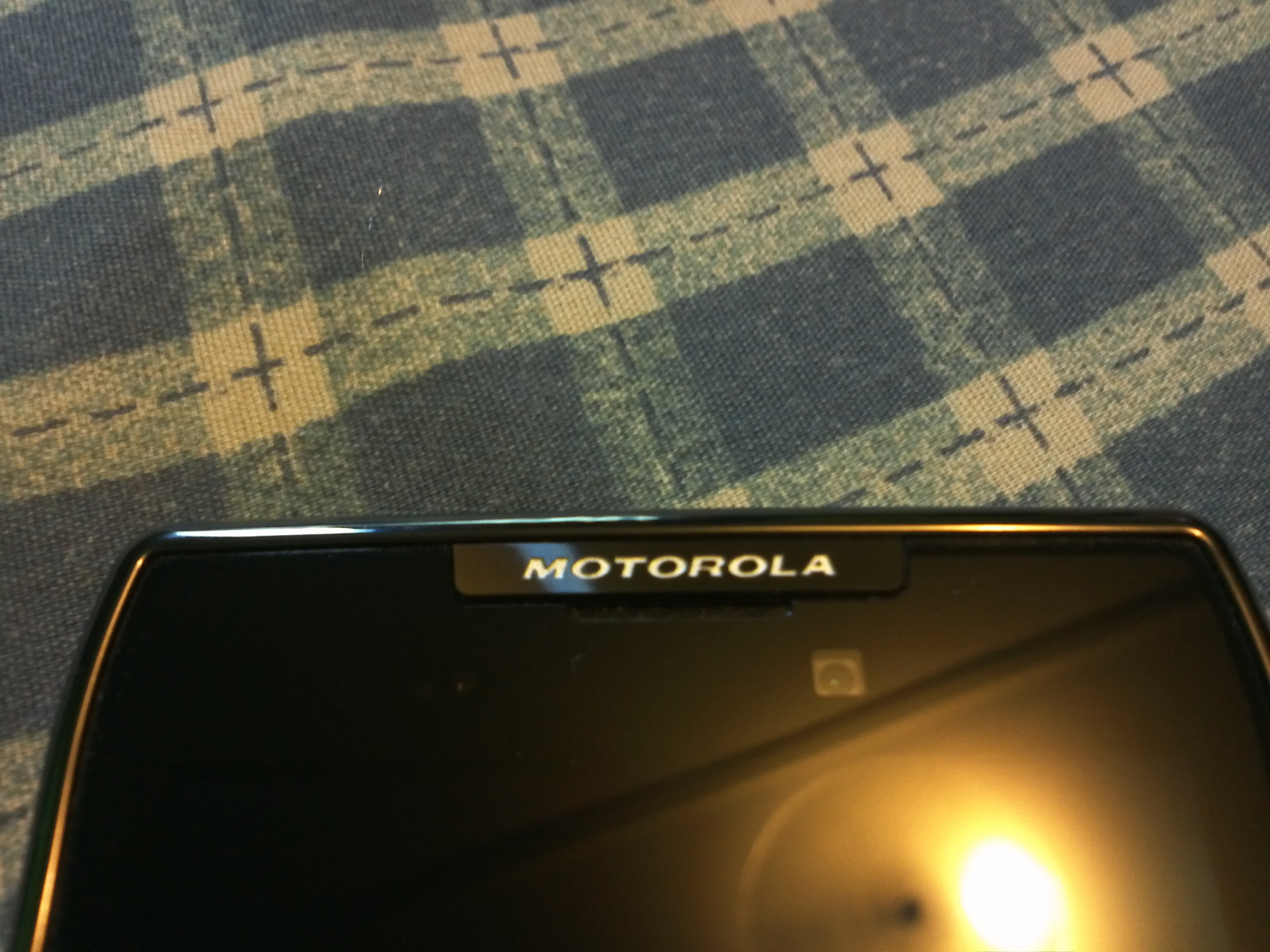 The front-facing camera, just under the Motorola logo.

Finally, there’s a 1.3MP front-facing camera, for all those video chats and self portraits.

The device itself fits nicely in the hand, without feeling too wide or awkward. It’s very light, but it definitely has a quality feel to it, unlike some other devices that seem cheap and made primarily of plastic. It does look more uniform than the original Droid Razr, which had that hump at the top of the device where the camera and LTE radio were stored. I’m duly impressed with Motorola’s ability to cram such a huge 3,300 mAh battery into a slim profile.

As far as performance goes, the Razr Maxx is up there with one of the best that I’ve ever used. Despite Motorola’s UI, it’s pretty fast, and that 1.2GHz dual-core processor has a lot of power. I have noticed some lag here and there, but nothing major enough to change my mind about the device.

While I’m on the subject of lag and bugs, I do want to point out that the Super AMOLED display is very vibrant and responsive, but I have noticed a recurring bug, where the device will lock itself, and the screen will go dark as if I’ve just pressed the power button. It’s an issue that randomly presents itself without warning. I’m not sure if this is a software bug on Motorola’s part, or if it’s a problem with the screen itself. I haven’t found any reports of this issue with other Razr Maxx users, so it may very well be that the device just hates me.

I’ll go ahead and answer a question that several people have asked by telling you that out of the box, you get quite a bit of bloatware. The Razr Maxx comes preloaded with Amazon Kindle, Blockbuster, GoTo Meeting, Let’s Golf 2, Madden NFL ’12, Netflix, MotoActiv, Motoprint, QuickOffice, Slacker Radio, SlingBox, and some Verizon-specific applications like My Verizon, Verizon Video, and VZ Navigator. Most of the bloatware can’t be uninstalled, and the only preloaded apps that you can get rid of are the games and a few others like GoTo Meeting. The Motorola and Verizon apps can’t be uninstalled, so unfortunately you’re stuck with those. 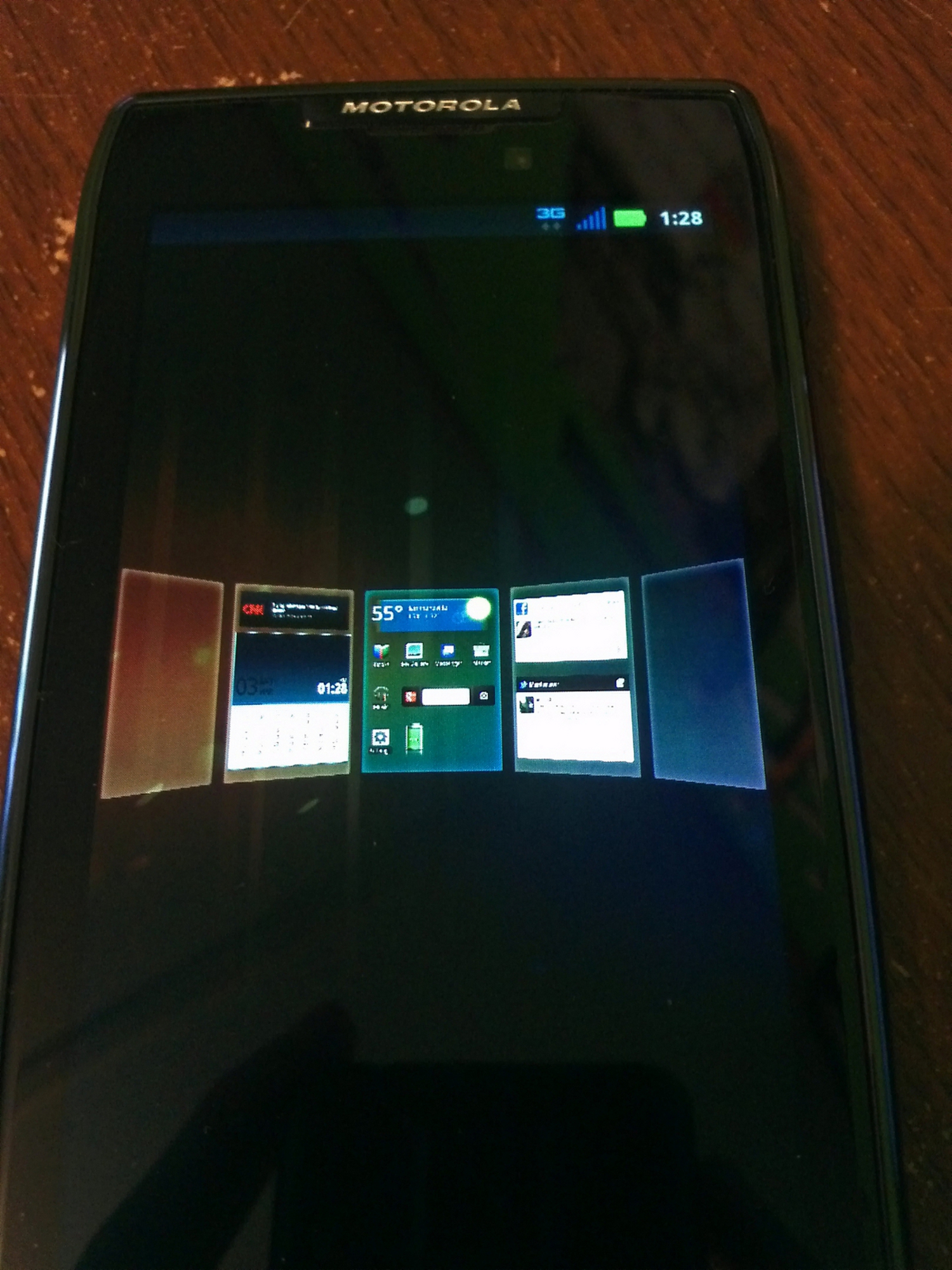 The launcher is the same as that on the Droid Razr, with 5 homescreens and a nice transition effect. The app drawer that Motorola has implemented is actually pretty useful. There are options to view different sets of applications, like those that you’ve downloaded, recent apps, etc. Motorola has even given users the option to create their own folders to categorize apps. 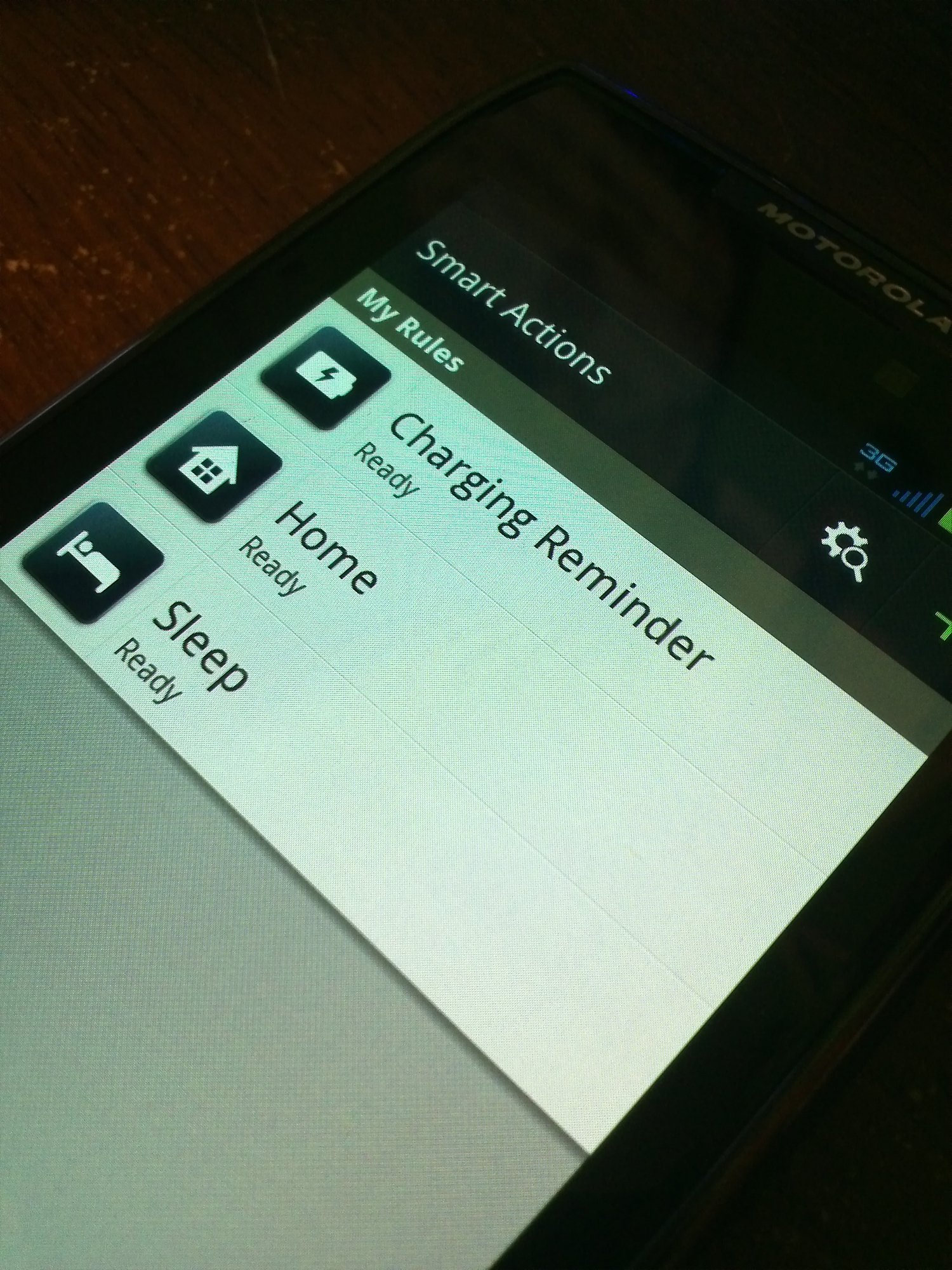 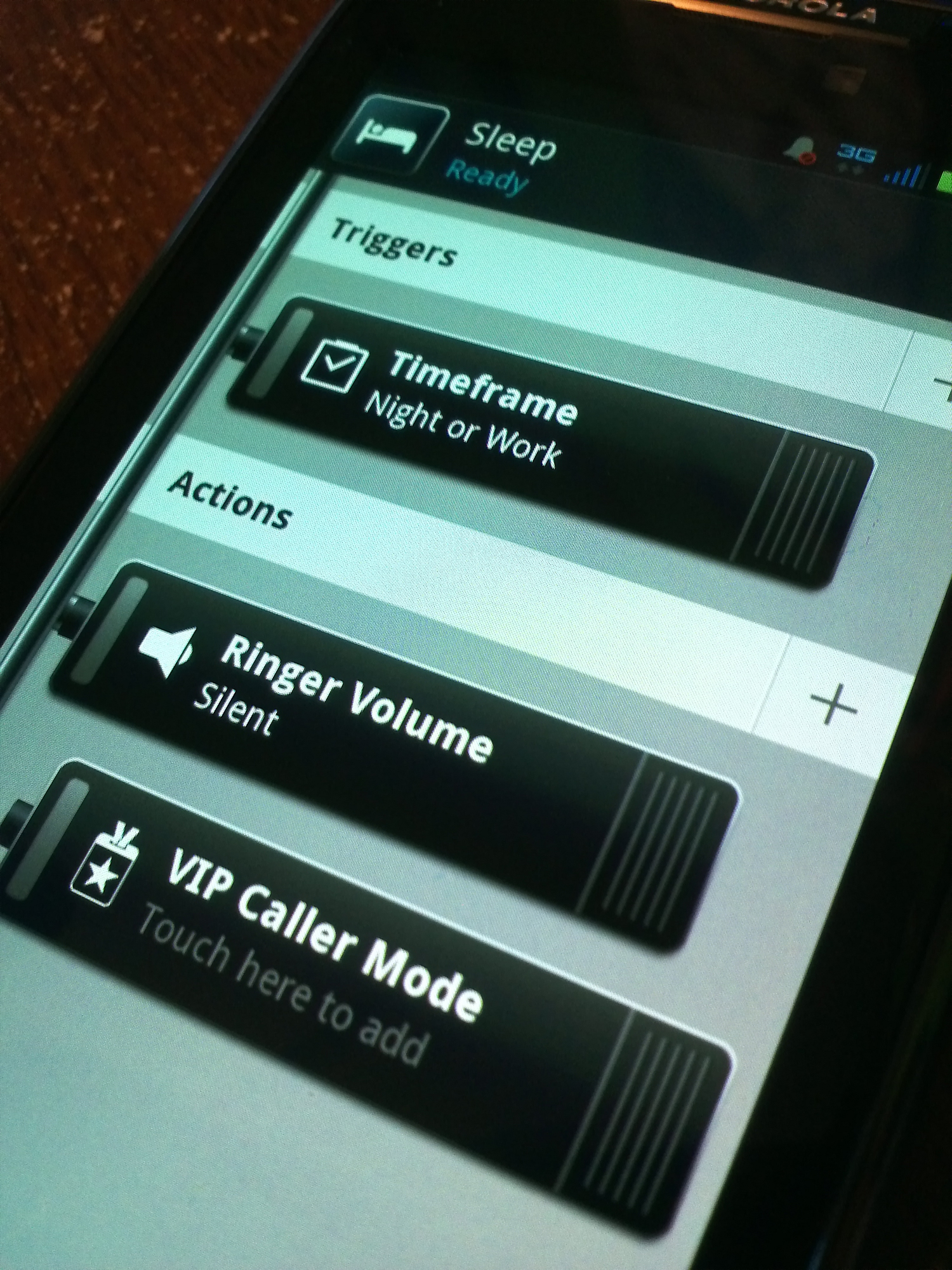 Motorola has gone the extra mile to make this device as usable as possible with the implementation of Smart Actions. These are actions that a user can set or adjust, to make everything seem more natural when using the device. For example, the Work option helps to speed up the device, so users can “stay productive at work.” The Meeting action sets the ringer to vibrate every time there’s a meeting listed in calendar events, and even allows the user to select a predefined message to send to anyone that tries to contact them during the meeting. Useful? Extremely.

Moving on, let’s talk about the camera on the Razr Maxx. Like I said, it’s got an 8MP rear camera with 1080p HD video capture and an LED flash, and I couldn’t be more impressed with the results that I’ve gotten. As you can see from the gallery below, pictures are clean and crisp, and they look amazing on the Super AMOLED display.

The Maxx is touted because of its 3,300 mAh battery, but I would consider buying it based solely on the camera performance. Motorola has added a camera slider to the lockscreen, so users can quickly jump from a locked device to snapping that priceless moment.

There are several standard options within the camera, like color effects, scenes, and geotagging. I was definitely pleased with the ability to switch between the rear and front-facing cameras with one click, as opposed to some other devices that require shuffling through menus to do this. The front-facing shooter performs just as well as a 1.3MP camera should.

With a big screen like this, the average user is probably going to surf the web more than a few times. The browser was left largely untouched by Motorola, which is a plus in my mind. Pinch-to-zoom works great, with no lag or checkerboarding. Flash content plays fairly smoothly, with little to no buffering. Pages loaded quickly, especially with LTE speeds. I don’t have LTE coverage where I live, but I was able to run some speed tests in an area where there is 4G coverage. The results were fairly consistent, and blew any 3G speeds out of the water. The download speeds peaked at around 20Mbps, and the upload at around 7Mbps. Some people may not like Verizon, but they can’t deny that Big Red has some of the fastest speeds we’ve seen.

Typing is surprisingly nice on the 4.3-inch display. Out of the box, you get Motorola’s custom multitouch keyboard that we’ve seen on some of their other devices recently, and Swype. Call me old fashioned, but I’ve never been a huge fan of Swype, so I stuck with the Motorola keyboard. The keys themselves look quite narrow, and I was worried about typing on the keyboard at first. However, it didn’t take long for me to get comfortable with the keys, and I was hammering out emails and tweets in no time. It’s very responsive, and the autocorrect is on par with most of the other keyboards I’ve used in the past. The keyboard along with the big 4.3-inch display make the Razr Maxx a good device for someone that might be unsure about the lack of a physical input method. 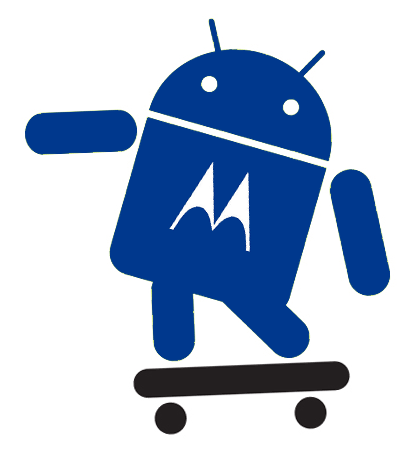 One of the biggest issues that some people have with Motorola’s devices is their UI. I’ll admit, I’ve never been a fan of Blur, or the Motorola Standard User Interface, or whatever they’re calling it these days. But they have slimmed it down, and it’s not as in-your-face as it used to be. There are actually a few Motorola services that I found to be really useful, like Motocast, which lets you stream content from a home computer while you’re on the go. There are also several widgets that they’ve added, like a favorite contacts widget, social networking, sticky notes, tasks, weather, and a world clock. So Motorola has really thought through their UI, and after looking at the leaked screenshots of Motorola’s Ice Cream Sandwich update for the Razr, I have to admit that I’m impressed with how far they’ve come since the disaster that was the Cliq. Please excuse me while I give a quiet shudder after that flashback..

Obviously, the Maxx is very thin, even with the big 3,300 mAh battery. Now the downside to having longer life is that the battery is nonremovable, like on the Droid Razr. I put the battery through a lot of testing, and try as I might, I couldn’t manage to kill it within a typical day. I made it though about 20 hours with heavy usage, including browsing the web, updating social networks, downloading a few apps, and checking quite a few emails, with WiFi turned on the entire time, before the battery got below 10%. I have to give Motorola credit where credit is due: this battery is darn near invincible. You’d have to be an extremely heavy power user to drain the battery in a day’s time.

Then again, most of the usage I put it through was on Verizon’s 3G network, and I imagine that being connected to LTE for a whole day would have a bigger effect on the battery. Even so, it’s unlikely that the device wouldn’t last at least 17 hours before needing a charge. Surprisingly, it doesn’t take any longer to charge than the average device, despite the larger battery. This is a feature that might appeal to the hurried, busy type.

So that’s about it for the Razr Maxx. To sum up my thoughts on the device:

Is it the device for you? That’s up to you to decide, but I can tell you that if you’re a heavy mobile user, and you haven’t been satisfied with battery life on other devices, you might want to give the Droid Razr Maxx a second look.

That’s all I’ve got for now, so I want to hear from you. Do you think bigger, slimmer batteries like this are paving the way for more powerful devices? Anyone planning to pick up a Droid Razr Maxx? Be sure to leave a comment below! 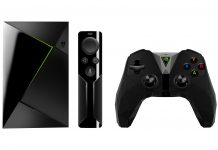 Samsung’s 18.4″ Galaxy View is another game changing device that Apple will surely copy in two years