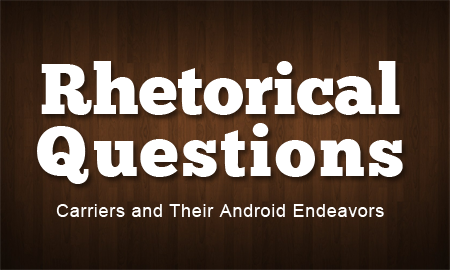 Plenty of questions come to mind when it comes to the various carriers and their Android endeavors.  Some  seem to get it right more often than not while others have been playing from behind (ahem, AT&T)  since day one.  Others seem to really want to the platform to help push them over the the hump.  I’m looking right at you, T-Mobile.

Thinking back over the last few years, I came up with a bunch of rhetorical questions about the wireless players and their Android efforts.  Some of them could be turned into a post of their own, argued on both sides.  Normally I will toss these on twitter just to see how you guys and gals respond.   Thinking they could be more fun as a whole, I decided collect them and break them into categories.  So, here’s the first in a series of (at least) four rhetorical question posts.

I would love to hear your take on some of these so, please, feel free to comment below!  No wrong answers here.