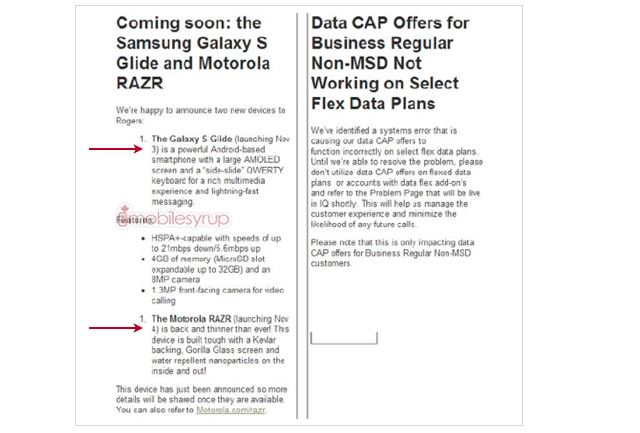 It seems that Canadian carrier, Rogers Wireless, has a lot of things up their sleeves as our friends over at Mobile-Syrup got their hands on an image confirming that the Canadian mobile giant will launch the Motorola RAZR and Samsung Galaxy S Glide. Both are high end devices launched a short time ago, and as long as the document isn’t a fake, Rogers will release the Glide on Nov. 3rd for $149.99 on a long term 3-year plan, and the RAZR on Nov. 4 for $149.99 on a 3-year plan or $649.99 off contract.

The Galaxy S Glide is actually Rogers version of AT&T Samsung Captivate Glide, which comes with a sliding QWERTY keyboard, Tegra 2 dual-core processor, and a lot of other goodies under the hood. On the other hand, the Motorola RAZR was launched by Verizon in the U.S. as the DROID RAZR, which is yet another flagship DROID device featuring amazing specs and mouth-watering design.

Hopefully, we will see this device rocking on Rogers network soon. Anyone in Canada planning to pick either device up from Rogers Wireless this November?