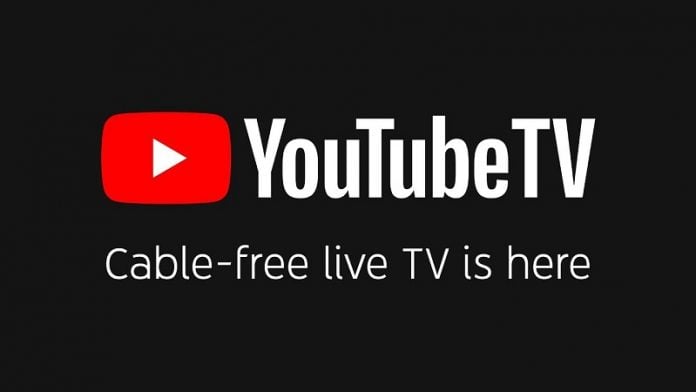 Last week, Roku released a fierce email outlining that the company was in a heated battle with Google over contract rights surrounding YouTube TV. This led to Roku revealing some rather troubling requests by Google that the streaming box maker categorized as “anti-competitive behavior” to continue offering YouTube TV to subscribers.

This naturally led to thoughts that this was headed to Google making a statement by pulling YouTube TV from Roku, and that has become a reality this morning. Roku has sent another email to users announcing that Google has “let the YouTube TV contract expire.”

Roku continues to expand on these details in that new Roku users and YouTube TV subscribers will not currently have the ability to download the Google-built application on any Roku device. If you aren’t currently signed up for YouTube TV, then you are simply out of luck for the foreseeable future. 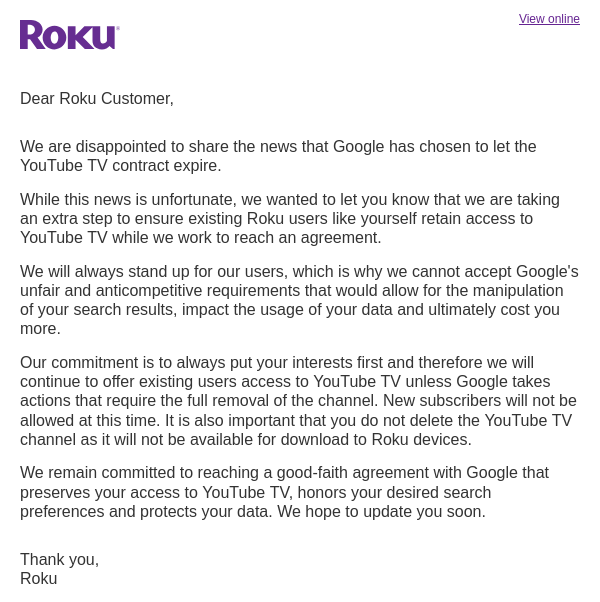 There is comfort for current users if they already have the app installed on their streaming box. If YouTube TV is installed, you should see no break in service from either company. Roku does note that Google does have the right to revoke further privileges including pulling the app completely.

This would also make it unavailable for current subscribers with  YouTube TV. While this one is not as likely as Google would risk losing happy customers with pulling the plug completely, these streaming disputes are pretty unpredictable and Roku is known for standing firm.

Roku ends the email statement encouraging users that discussions haven’t stopped with Google on solutions. This includes “good-faith” agreements to make sure current customers continue to get the best service from both companies possible.

These contract negotiations are a huge deal for users that sheds a negative light on streaming as the future of content. Much like cable disputes, it limits users from content they have made past investments in after the fact. Roku users may not have currently used YouTube TV but knowing it was available could have been a factor when making the purchase.

We hope these two content giants find a quick and user-friendly conclusion.

Google has now responded in a posting on the YouTube Blog website. The company is calling all claims by Roku for anti-competitive behavior “baseless and false.” Google is squarely directing blame of this dispute back at Roku.

YouTube and Google make the assertion that Roku terminated the contract and not Google. Taking the explanation further it cites the debate was over Roku also trying to dictate an early renewal of the standard YouTube app at the same time as YouTube TV.

Our initial conversations started with Roku simply to renew the current terms of their ongoing deal with YouTube TV, which has been in place for several years. Our offer to Roku was simple and still stands: renew the YouTube TV deal under the existing reasonable terms.

However, Roku chose to use this as an opportunity to renegotiate a separate deal encompassing the YouTube main app, which does not expire until December.

Google points out that it is not the first company to come into conflict recently and be strong-armed by Roku. It also pointed out the need for hardware requirements is due to advanced technologies not playing nice with Roku’s existing support of video codecs.

Google then closed this post by point-blank denying ever asking for preferential search treatment or access to user data.

Our agreements with partners have technical requirements to ensure a high quality experience on YouTube. Roku requested exceptions that would break the YouTube experience and limit our ability to update YouTube in order to fix issues or add new features. For example, by not supporting open-source video codecs, you wouldn’t be able to watch YouTube in 4K HDR or 8K even if you bought a Roku device that supports that resolution.

We can’t give Roku special treatment at the expense of users. To be clear, we have never, as they have alleged, made any requests to access user data or interfere with search results. This claim is baseless and false.

AndroidGuys will keep an eye on this heated battle in tech, but this one seems far from over at the moment.