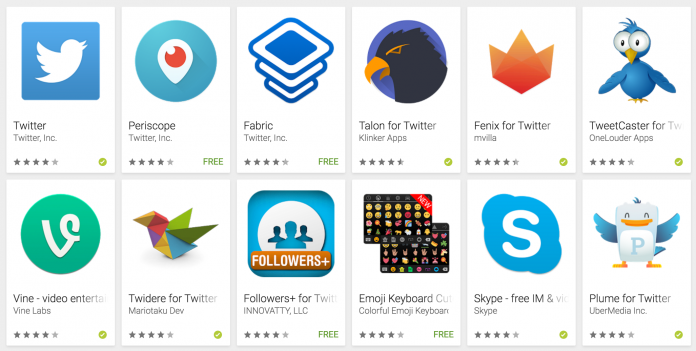 Twitter is my personal choice for Social Media. Restricting contact to 140 characters forces people – and, more importantly – news outlets – to really get to the point of their interactions. Headline tells you what to expect, and if you’re convinced you should read it, you can click the link. Simple. Clean. Easy. As such, I’ve gone through a ton of Twitter clients over the years; these are my favorites.

Talon was my first Twitter client not actually called Twitter. It was also, if I recall, the first Twitter client to support Google’s Material Design when it first debuted. Designed from the ground up by KlinkerApps, maker of the excellent EvolveSMS texting app, I always thought this client didn’t get the publicity it deserved because it focused on doing many things quite well, while not quite excelling in any one area. If there’s one area it does excel in, however, it’s style – there are many, many themes for Talon, both paid and free, that can really let you customize your look.

I adore Plume. There’s a single feature that really, truly could change the game for Twitter in general, and that’s an automatic “TweetLonger” expander integrated into the client. If a user has made use of the service in their long tweet, a tap on the tweet itself within the app will expand it to its full, longer-than-140-characters size. I think having the option to view long tweets could really expand Twitter’s use as a source of news and journalism, if only TweetLonger’s used was more widespread. Unfortunately, Plume’s other functionality is slightly less impressive, albeit perfectly competent.

Tweetings’ primary claim to fame is pretty simple – and yet very rare, in the Twitter client world; Push Notifications. I, personally prefer to have my Timeline on Manual updates only – but I like to get my Activity notifications in real time (yeah, I’m weird). This usually means that I have to either sacrifice automatic refresh of my mentions in favor of a manual refresh of the timeline, or risk not getting my notifications because the refresh is set to manual. With Tweetings, I don’t have to stress about that decision; it’s also got a solid UI and lots of great features, to boot. Give it a shot.

In a comment on my “Day One Apps” post, I was referred to Fenix as a replacement for Tweetings; since switching, I’ve seen the light, so to speak – Fenix is an incredibly solid Twitter client with a great UI and a fantastic set of customization options. I do miss the true push notifications that Tweetings (and only Tweetings, as far as I can tell) boasts. Give Fenix a try – it’s worth the price tag.

Updater: On 4/25 Fenix developers tweeted that app has reached its token limit and been pulled from the Play Store.

What, you thought you’d escape this list without seeing the official app that started it all? Think again, Sir-or-Madam. The first-party Twitter app has improved significantly since hiring Joaquim Vergès, developer of the still-fantastic Falcon Twitter client (see what I did there? Six apps instead of five this week). Many of Falcon’s features have been integrated into Twitter‘s app, and Vergès’ eye for detail is felt within the foundationally solid, if largely unexciting, client.

There you have it  – the five best Twitter apps for Android, in the eyes of the Android Guys. Think we missed one? Drop us a line in the comments.