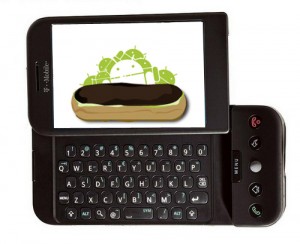 T-Mobile G1 owners have been waiting on pins and needles for the day they learn that their beloved sweetheart handset will no longer be supported with software updates.Â  At first, the rumor was that Donut might not make it.Â  Now we’re hearing, and even somewhat thinking, that Android 2.0 (Eclair) will not fit or run well on the device.Â  Along comes a rumor that could put us at ease for just a little bit longer…

AndroidSPIN is reporting that the T-Mobile G1 will be updated to Android 2.0/2.01 in the near future. There’s no mention of how or where the news comes from specifically, but according to them, an OTA update has been prepped to roll out.

The update will be at least Android 2.0 but more likely Android 2.0.1 as both versions have already been prepared as OTA updates.Â  An anonymous source of ours has confirmed that both the Android 2.0 and the Android 2.0.1 are in the hands of some very fortunate people.Â  Nothing can be released just yet due to Non Disclosure reasons.

So, G1 owners… how does that news sit with you?!