Insurance for your phones can be a challenge. Carriers offer insurance, but at at around $10 a month, plus a deductible when you make a claim. This can add up to be almost the same price as buying a new phone. You can buy a cheaper option from a company like SquareTrade, or if you’re an Apple device owner, you can get AppleCare+ from Apple themselves.

Now it looks like Google is getting into the warranty game too. 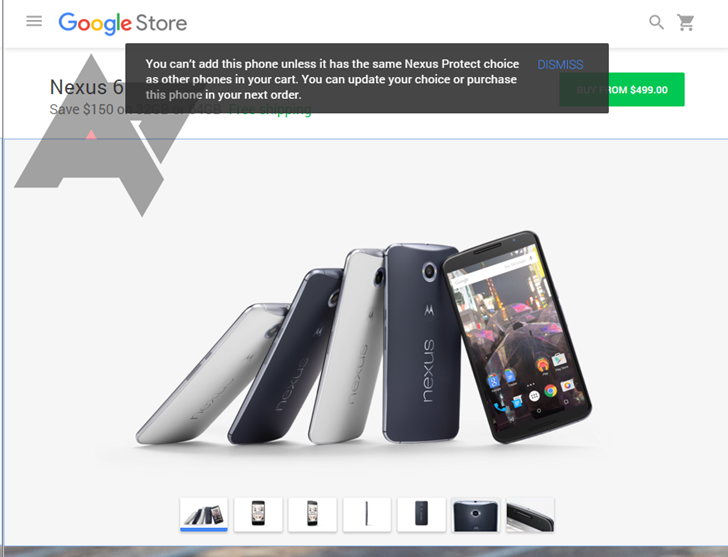 Our friends over at AndroidPolice have discovered references to “Nexus Protect” in the page source on Google’s device pages. The exact toast message shows up as this:

[blockquote author=””]You can’t add this phone unless it has the same Nexus Protect choice as other phones in your cart. You can update your choice or purchase this phone in your next order.[/blockquote]

The assumption we’re going to make is that Nexus Protect is an AppleCare type product. Currently AppleCare+ for iPhone 6 and earlier models offers you two years of hardware coverage, support and up to two “incidents” claims (with a $79 deductible).

We have no concrete evidence of what Nexus Protect will offer, but we hope that it’s in the same range as Apple’s services where you can swap out a broken phone for a nominal fee. HTC recently released Uh Oh protection. With Uh Oh, they’ll swap out your HTC One M9 in the first year no questions asked, so it looks like this is a growing trend.

We expect to see two new Nexus devices in the coming months, so it seems like that would be a logical time to launch such a program.