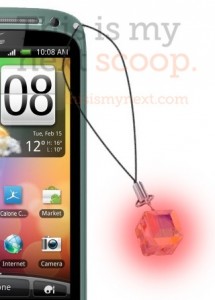 Word on the street is that HTC is conducting a focus group with female users, trying to put together a knockout Android phone targeted at the ladies.  According to ThisIsMyNext, the Verizon smart phone currently carries a code name of ‘Bliss’ and features both physical tweaks as well as tailored software.  The color of the device is said to be somewhere between forest green and sea green and the back has a rubberized back so “women can have a better grip of the phone”.  Because their hands are made with different skin or something.

In terms of software, the test devices have calorie-counting and shopping apps  pre-installed and a “calming” wallpaper.  We’re not sure if HTC is trying to stereotype their target audience here and scare off dudes altogether, but whatever.  Nothing a little rooting couldn’t fix anyways.

Possibly the weirdest feature here is that the Bliss has an accessory called the “charm indicator” which lights up to notify users of new messages, missed calls, etc.  Rather than pairing over Bluetooth, it attaches physically via a cord.  Were this to be wireless we could see plenty of people interested in such an accessory, but tethered and tangle-ready, probably not so much.

The charging dock is said to include built-in speakers and will automatically enable alarm mode when a user sets it down to charge.  And finally, there are matching Bluetooth headsets and a square-shaped speaker for car visors expected as well.

No word on when to expect the Bliss, assuming it ultimately does see the light of day.