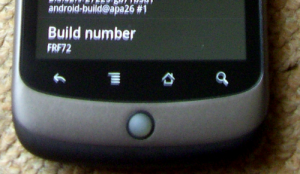 A few sources are reporting that a new OTA update is starting to roll out to Nexus One owners. From what we can tell, the report orginates with Sizzled Core, who include the screenshot seen here. The build number, FRF72, indicates a Froyo build subsequent to FRF50, the pre-release Froyo build that was OTA’d to a small number of Nexus Ones recently.

The OTA is reportedly only 1.8 Mb, and so would presumably be an incremental update to those who already received FRF50. Sizzled Core reports that the changelog mentions only updates to the browser, including better Flash support.

The skeptical folks at XDA-developers note that this screenshot could be faked fairly easily, but also point out a Google employee who tweeted about receiving a Froyo update today.

What do you think? Real or not? Presumably we’ll know more soon.

Update: We’ve not seen reports of Nexus One owners receiving this update since this post went up, leading us to conclude that either this rumor is entirely false, or that FRF72 is an internal QA build not being distributed OTA.

Update 2: We’ve seen several Google employees make reference to getting a Nexus One Froyo update, in some cases even referencing FRF72 as the build number. Looks like this is a real build going out OTA but only internally to Google employees for now.

Thanks to Thomas Riley for the tip!