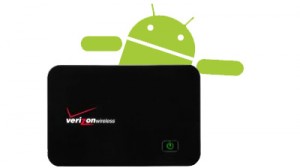 It’s pretty much a done deal that the Motorola Sholes and HTC Desire are going to be Verizon’s first two handsets but what about the third one?Â  According to information passed to Unstrung, the third handset will be manufactured by a smaller company and will be able to act as a personal router using the “MiFi” service.

The MiFi device provides a portable wireless 3G Hotspot anywhere and everywhere one goes on the Verizon network. Up to five devices (notebooks, netbooks, smartphones, etc.) can connect to the service at once, making it a router in your pocket.

This Android-based handset would be the first to gain approval on the Open Development program. With this initiative, Verizon pledges to offer a quick, pain-free way of approving devices for their CDMA network. Unstrung reports that this handset will debut in early 2010.