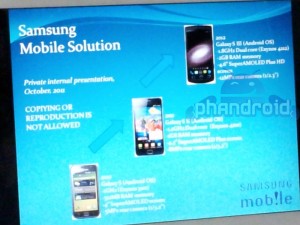 We haven’t even finished rolling out the three U.S. flavors of the Samsung Galaxy S II and we’re already starting to look at rumored specs for its successor. At least, that’s what we believe we’re getting here.  According to details obtained by our friends at Phandroid, the GSIII should feature details a dual-core 1.8GHz processor, 2GB RAM, a 4.6-inch Super AMOLED HD display, and a 12-megapixel camera.  These specifications appear to come from an internal Samsung Mobile document although a number of errors and typos add a bit of “may not real” to the equation.

A glance at the calendar tells us that we’re fast approaching the end of the year and that time where we start digging into rumors for CES and Mobile World Congress.  Whereas we’ve waited a long time to get our hands on the Galaxy S II here in the United States, we should remember that it was originally unveiled way back in February.  Given there’s only four months between now and then, we would not be surprised if these details were at least somewhat accurate.