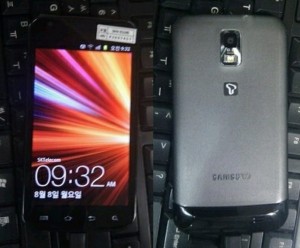 A pair of recent rumors seem to be converging around an upcoming dual-core Android phone out of the Samsung camp known as the Celox.  We heard on Wednesday of last week that the company was working on a new device for Korea which would essentially amount to a Galaxy S II with LTE support.  A matter of hours would pass and we’d have what appeared to be the short-term lineup of upcoming Samsung phones. One particular model listed on the roadmap, the GT-I9210, appears to match very closely with the Celox.

The word on the street today is that the phone you are looking at up top is actually the Celox and the hardware inside includes a dual-core 1.5GHz processor, a 4.5-inch display, 1GB RAM, and an 8-megapixel camera.  Toss in the LTE support and you have nearly identical phone as the I9210 from last week.  It’s worth pointing out that the 9210 did not have a processor speed listed and that it falls in line with other recently rumored Samsung products.

We’re not sure why we didn’t noticed the similarity between the two phones but there you have it.  Verizon has been rumored to be carrying an LTE-ready Galaxy S II phone for a few weeks now so it’s possible that we’re looking at that here too.  Maybe that Verizon twitter rep wasn’t so far off the mark, huh?