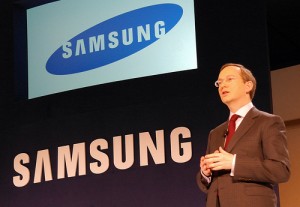 As expected, Samsung has officially joined Sony and Logitech as official Google TV partners.  Last week’s CES saw the company announcing (PDF) both a Blu-Ray Player and companion box with Google TV capabilities. Both devices run Android and will allow consumers to watch television and surf the internet at the same time.  In addition to these, Samsung has designed a special Google TV remote control that will feature a full QWERTY keypad and microphone for voice search.  Pricing is not yet known whereas availability is somewhat vague with the “first half of 2010” listed. We expect them to be priced similar to the Sony Blu-Ray player and Logitech Revue once they debut. Here’s hoping that Google is able to convince the various networks to play ball by the time these arrive.