[df-subtitle]As per the norm, all major wireless providers will offer the plus-sized handsets[/df-subtitle] 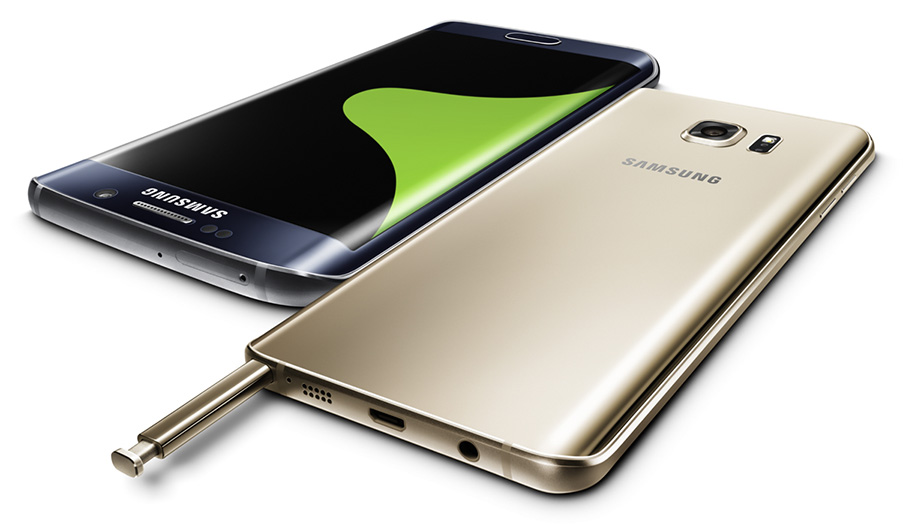 As if we might have expected anything else, Samsung today formally revealed its annual Galaxy Note smartphone. Set to arrive in just over a week’s time, the Samsung Galaxy Note 5 is the 2015 take on the larger flagship experience.  Additionally, Samsung also revealed the successor/sibling to its curved-edge Galaxy Note Edge and Galaxy S6 Edge with the Galaxy S6 Edge+.

If you’re looking for a revolution, you won’t find it here. The specs change little from last year’s iteration, making the Note 5 a simple evolution. Indeed, the hardware is much like that found in the Galaxy S6 launched earlier this year.

Powered by Android 5.1, the Galaxy Note 5 packs a 5.7-inch display at 2560 x 1440 pixel resolution (518ppi). Although it’s the same size screen as that found in last year’s model, the overall size of the devices has been trimmed down a shade.

In terms of processing power, this year’s model employs Samsung’s own octa-core Exynos chip; four cores at 2.1GHz and four cores running at 1.5GHz. To bolster performance, the Note 5 uses 4GB RAM, up from 3GB in last year’s model.

Storage capacities are a somewhat of a bummer; only 32GB and 64GB options are available and there’s no microSD expansion slot.

Battery has been dropped down to 3000mAh for this generation so we’re interested in seeing what sort of impact that has in usage. Betting on a cord-free future, the phone comes equipped with fast, wireless charging; Samsung promises a 0-100% charge in two hours.

As for cameras, the Galaxy Note 5 offers up a 16-megapixel f/1.9 sensor on the rear with a host of software enhancement modes. Around front we find a 5-megapixel shooter which should be more than enough for selfies.

Like it did for the Galaxy S6, Samsung has opted for the metal and glass approach in this year’s plus-sized phone. While it looks great and has a premium feel, it trades off removable batteries and external storage. As to whether that matters to the average user base, that varies per person.

The Samsung Galaxy Note 5 also includes the digital fingerprint scanner that’s found in the Galaxy S6. What’s more, there’s also a heart rate sensor on the rear of the device.

Because this is a “Note” model we’re dealing with, you’ll, of course, find an S-Pen digital stylus. And, keeping with its own tradition, Samsung has improved this year’s version yet again.

This time around the stylus has a unique click-in release mechanism. Software has been given a punch up here with enhanced Air Command, PDF markup, and other little touches. Another cool feature we’re keen to try is the Instant Memo which lets users jot notes on the screen even when the display is otherwise turned off.

The Samsung Galaxy Note 5 will be sold in black and white options through Verizon, AT&T, T-Mobile, Sprint, and US Cellular. Pricing has not been disclosed so expect your service providers to disclose their own respective costs. Pre-orders begin today.

Save for the omission of an S Pen digital stylus, specifications for the S6 Edge+ is largely identical to the Note 5. That is, more specifically, in terms of the hardware details that comprise the internals.

The key feature of the S6 Edge+ is its curved 5.7-inch display. In short, if you like the idea of the Galaxy S6 Edge but simply want something larger, then this is the device for you.

Like the Galaxy Note 5, the Galaxy S6 Edge+ will be launched across the major wireless providers on August 21. Pricing is not defined yet so expect separate announcements in short order. Pre-orders start today at 3PM.