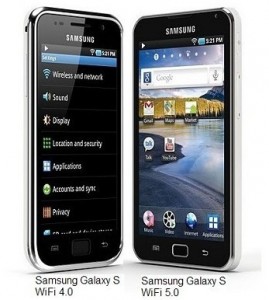 Seemingly in the face of their recently started legal battle with Apple, Samsung has gone ahead and announced the launch of their two new Galaxy S media players.  Named 4.0 and 5.0 respectively, the naming simply reflects the sizing of their screens.

A quote from the facebook page where Samsung put an announcement up:

Complete with Android 2.2 “Froyo” for access to thousands of Android apps & 4’’ and 5’’ large, high quality screens, these handsets will provide the ultimate smartphone-like experience.

It is interesting to see their wording here, but make no mistake, this is a marketing move much like Apple has done with their iPhone/iPod Touch devices. The Galaxy S media players are everything the Galaxy S phones are, but without, well, the phones. Let us know what you think in the comments.