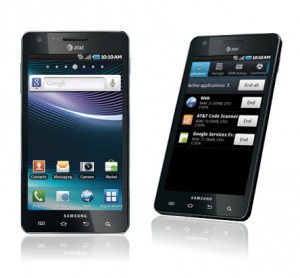 Exactly four months from the day they first announced the handset, Samsung and AT&T have officially given customers a firm price and launch date for the Infuse 4G.  Look for Ma Bell to offer the “Nation’s Thinnest 4G Smartphone” at $199.99 come May 15th.  How thin?  It’s 8.9 mm in the thinnest spot, 9.24mm at its thickest.

As a refresher, the Infuse 4G features a 1.2 GHz processor and a massive 4.5-inch Super AMOLED Plus screen as well as an 8-megapixel camera on the back with a 1.3-megapixel camera on the front.  Software-wise, the phone runs Android 2.2 with various AT&T and Samsung apps, including Samsung Media Hub, U-verse Mobile, U-verse Live TV, and Angry Birds.  And not just any old Angry Birds, mind you.  This version features a special edition where players can unlock a special “Golden Egg” level of the game, exclusive to Infuse 4G users.

AT&T is also taking the opportunity to bow a new Android app today, pre-installing their JustUs widget/live wallpaper.  The free application pulls social media and text from five of your favorite contacts and turns it into an animated wallpaper.  Side note: JustUs is compatible with any Android 2.2+ handset out there, not just AT&T’s!

To help get things moving, AT&T and Samsung are offering a special deal for the first 500,000 Infuse 4Gs sold.  These devices will include a $25 voucher for content from Media Hub.