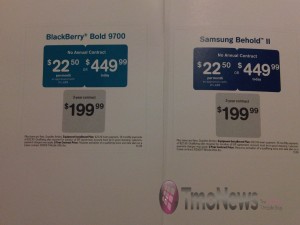 We’re days away from the launch of T-Mobile’s 4th Android-based handset and we’ve learned the retail price.Â  After getting rumored at $249 with a 2-year agreement, the final cost of the Samsung Behold II gets listed at $199.99 with a 2-year agreement. Don’t feel like getting tied up with a contract?Â  You could always buy it outright for $449.99 and space it out over 20 months with one of T-Mobile’s Even More Plus plans.

Yep – we know what you are thinking.Â  “For $200, I would rather go buy a Droid!”Â  We’ve got a couple of bullet points to share with you before you make any hasty decisions.

Your turn to sound off.Â  Which are you looking forward to getting and why?