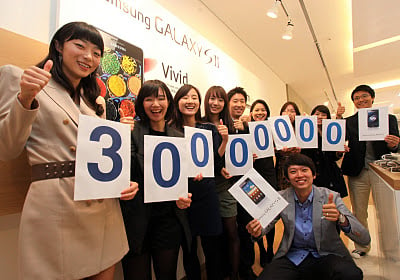 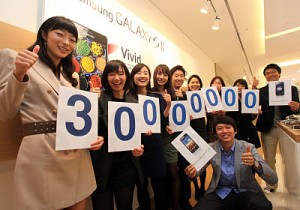 Samsung issued a press release early this morning, touting a new sales figure for their Galaxy S and Galaxy S II series of phones.  Since making its debut in 2010, the two lines of Android-powered smartphones have gone on to surpass more than 30 million in combined sales.  A bulk of the sales comes from the Galaxy S (20 million) however the Galaxy S II stuff should undoubtedly do just as well.

We’re just getting started  here in the United States with the second round of Galaxy S phones so we fully expect to see a 40 million mark, or higher at some point in the coming months.  The momentum of the first series, coupled with bigger, better hardware, should propel the 2011 lineup to 20 million of its own, if not more.

GALAXY SII has set a new record for Samsung, generating more than 10 million sales – quicker than any device in Samsung’s history. The device also recently received five out of the total ten Mobile Choice Consumer Awards 2011 in the UK as well as 2011 Gadget Award for being chosen as the best smartphone of the year by T3, confirming it as a run-away favorite smartphone with consumers this year. It continues to gain traction as Samsung’s flagship smartphone – a stylishly designed, slim and ultra-portable device combining an unrivalled viewing experience with powerful dual-core processor performance.

Launched in 2010, Samsung GALAXY S reached almost 20 million unit sales, making it the highest-selling mobile device in Samsung’s portfolio to date, and another record-breaker for the company and the mobile market.

Since launching to high critical acclaim two years ago, the GALAXY S range has continued to gain popularity among consumers and propelled the GALAXY brand to one of the most recognized mobile brands in the world, with Samsung now the largest Android smartphone vendor and the second largest phone vendor overall worldwide (IDC).

“Since its launch only five months ago, GALAXY SII has seen tremendous sales success and garnered enthusiastic reviews from consumers and mobile industry watchers across the globe. This is in addition to the continued sales momentum behind GALAXY S, which we launched at Mobile World Congress 2010 as continues to be a run-away success with consumers,” said JK Shin, President and Head of Samsung’s Mobile Communications Business.

“The phenomenal success of these smartphones once again demonstrates how the GALAXY S smartphones is setting the standard for smart mobile technology around the world.”