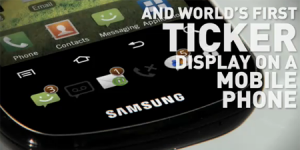 Not that we’re complaining much here, but Samsung might want to take a look at their roof.  Last night’s announcement ended up merely a confirmation of leak after leak.  Turns out there weren’t any new details surrounding the Samsung Continuum. Or were there?  Did you know that the two screens stuff is actually just one screen? Yes, that’s right. The lower screen, named the Ticker, is just a part of one big screen that get’s activated when there’s a notification or when you hold the phone the right way. The four standard Android-buttons are just a layer above the touchscreen.

It might be a wink to the iPhone 4, but the way you have to hold your phone in order to activate the ticker is just like you have to hold the iPhone 4 to get the famous Death Grip. Not much to say besides that, it’s reported to be snappy, yet another version of the Galaxy S and it’ll ship with Android 2.1. Samsung hinted to a 2.2 update, and eventually even a 2.3 update in the future.

Last but surely not least: It’s Verizon-branded, meaning it will come with Bing and Bing Maps instead of Google. Don’t ask us why, but Verizon prefers Bing above Google. Why? Oh, yeah. Money.