I’ve made no secret of my love for the Samsung Galaxy S8 Plus, but the one thing that holds it back from truly being great is the fingerprint scanner. Some, including myself, have been saying for a while now that all phones are great and choosing your next phone comes down to finding the one that annoys you the least. The Galaxy S8 Plus is awesome, but it has the most annoying drawback of any phone on the market.

Putting it next to the camera sensor and pretty high up on the device isn’t ideal. I get why it was done (the wireless charging sensor is placed where the fingerprint scanner should be) but it still sucks nonetheless. I’ve made far greater usage out of Trusted Places and Trusted Devices on my Galaxy S8 Plus than any other device I’ve ever owned just so I don’t have to use that damn fingerprint scanner. And it looks like it’s going to stick around for awhile longer.

Currently, there’s little reason for the S9 to move the fingerprint scanner under the glass. Apple recently scrapped plans for the iPhone to move TouchID under the display due to manufacturing hurdles, so why would Samsung force the issue if it hasn’t perfected it? As of right now, VIVO is the only phone manufacturer to show off a prototype of an under the display fingerprint sensor it and it has some significant drawbacks.

While I’m personally disappointed, I’m also fine with Samsung not releasing something before it’s perfected. Some of you may remember the fingerprint scanner on some of Samsung’s earlier devices where you had to swipe the home button. Boy, did that suck even more than the current solution.

In KGI’s report, it also seems that Samsung is going to ditch Synaptics for Egis. Switching fingerprint scanner suppliers for the Galaxy Note 9 would be news on its own, but what really makes this stand out is that apparently, Egis fingerprint scanners are four to five times the price of those supplied by Synaptics currently. Could we see a base $1000+ Galaxy Note 9? 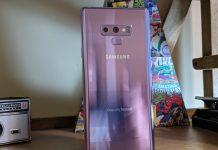