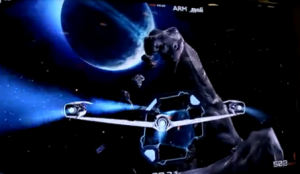 Samsung was at the Game Developers Conference this week where they took the opportunity to show the prowess that is their new Exynos 4210 processor. So just how capable is this new dual- core chipset? Hit the video below to see how it looks. But if you want to read how it performs, here ya go.   Samsung was demonstrating a game called TrueForce on a TV set at 1080p resolution at 60fps in stereoscopic 3D fashion.  According to Engadget, the Exynos could do even better (70fps) were it not for the HDMI 1.3 port on the reference board.

So yeah, this is the sort of gaming that awaits you in the Samsung Galaxy S 2.