Samsung recently released details of its Galaxy Note7 recall program. Weeks after the news began to break about exploding Note7 phones, Samsung has begun an exchange program with the cooperation of the U.S. Consumer Product Safety Commission. Samsung has received flack in the past for only instituting a voluntary recall without any governmental backing and for confusing messages of whether users should shut off their phones or accepted an update that would only allow them to charge the phone to 60%.

But, we’re left wondering what more Samsung could have done. First, let’s jump into the details of the recall program.

If you currently own a Samsung Galaxy Note7 purchases prior to September 15, you’re eligible to exchange your device for a brand new, non-exploding Note7 no later than September 21. If you’re not interested in exchanging for another Note7, you can choose either a Samsung Galaxy S7 or Samsung Galaxy S7 Edge to swap your defect device for. If you’re thinking “well, my Note7 cost $200 more than a Galaxy S7, what about that price difference?” you’ll be relieved to know that you will be refunded that difference between them. If you picked up any accessories, you’ll be able to replace those as well.

If you just want to wash your hands of the whole fiasco, you may be able to get a refund. Samsung states you can contact your point of purchase to see about a refund, but there is no word on a mandatory refund. T-Mobile let me return my purchased Note7, but customers have reported that other carriers will not allow a full refund of the phone and even some T-Mobile stores have denied refunds. Some carriers will allow refunds even though it doesn’t state it on their sites and vise versa. The whole thing looks like a mess. Customers are left to go into stores and hope for the best.

Early we posed the question of what more Samsung could’ve done. Earlier today it was revealed by Bloomberg that Samsung may have rushed the production of the Note7 on reports of a “boring” iPhone 7 from Apple. Whether it’s true that Samsung made faulty phones or not to beat the iPhone out of the gate will remain to be seen, but what truly matters is in the aftermath.

If you’re in the market for a new-to-you (aka used) Note7, there will be an easy to determine whether or not your phone is safe. Samsung is introducing a green battery icon within Android that will let you know if your Note7 is among those affected with a bad battery. 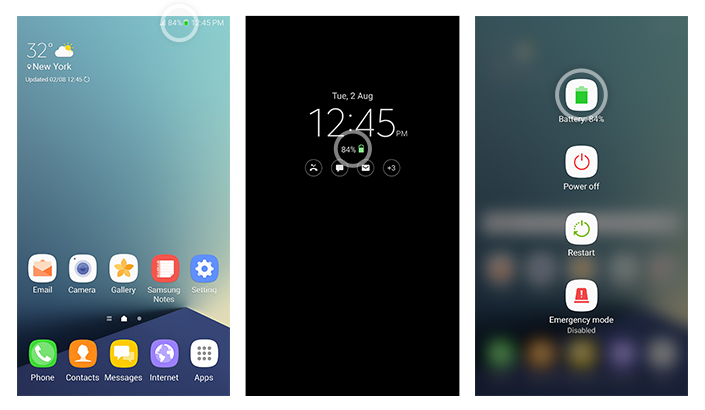 You can see the green icon in the Status Bar, the Always-On Display, and the Power-Off Prompt screen. In addition to the software, the box will also have a black square on the packaging. All of these safety measure combined should make it pretty easy to find out if you have a new Note7 or one that was recalled and never turned in.

Samsung deserves high praise for recalling every single Note7 instead of half-assing a recall. But, in my opinion, we should have seen full refunds offered for every device on the market no matter where they were purchased from. Many customers will lose faith in Samsung and I don’t believe they should be stuck with another Samsung device. Let them exchange for another phone outside of the Samsung lineup or get their money back and use their old phones.

The fallout from this cannot be predicted right now. How much this hurts Samsung in the long run is a hot topic of conversation among those in tech fields. What the Korean giant must do to get back in the good graces of consumers is something that will loom large for DJ Koh, Samsung’s Mobile Chief.

Do you think that Samsung has acted responsibly during the recall? Do you think it put customers at risk to beat the iPhone? Let us know down in the comments what your thoughts are about Samsung right now.