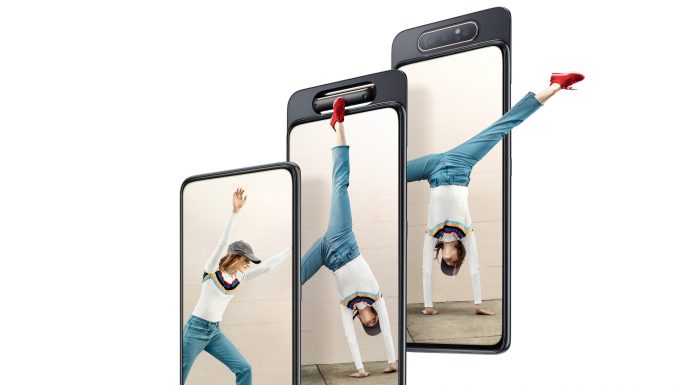 In search of the truly full screen display, companies have been trying to figure out what to do with the front-facing camera. We’ve seen notches, pop-out cameras, and phones that just completely dismiss the front facing camera but put a secondary screen on the back of the phone so you can still take those perfect selfies.

Samsung has a different idea. With the announcement of the Galaxy A80, the South Korean juggernaut brings us a rather unique camera setup. The phone is a slider much like the Xiaomi Mi Mix 3 but instead of placing a dedicated front-facing camera in the slider pop-up, Samsung flips the rear mounted camera to shoot right at you.

It’s a pretty interesting concept and quite compelling if selfies really matter that much to you. Why stick the best camera on the back of your phone where you can’t use it for most of your group shots, right? This design allows users to take advantage of the triple camera setup at all times.

The three cameras on the phone are a main 48 megapixel f/2.0 lens, an 8 megapixel ultra wide lens, and a time-of-flight (ToF) sensor. Because of this new flipping camera mechanism, there’s no notch on the massive 6.7-inch 1080 x 2400 Super AMOLED display, something notch haters can all get behind.

Samsung is calling this new display “New Infinity” which basically means its the same curved display that you’ve seen in Samsung’s flagship phones for years now with no hole punch or notch included. It’s really not a new concept and we’re not really sure why the company felt the need to rebrand it, but C’est La Vie.

The Galaxy A80 is a budget-ish device, but we’re pretty surprised by how powerful the it is. You’ve already heard about the impressive display and cameras, but there’s also 8 GB of RAM on board along with a Qualcomm Snapdragon 730 SoC, which is an octa-core chip with two cores clocked at 2.2 GHZ and six low-power cores clocked at 1.7 GHz. There’s also a 3,700 mAh battery that supports up to 25W charging and an under-display fingerprint scanner like the Samsung Galaxy S10 and Galaxy S10+.

The Samsung Galaxy A80 will hit the markets on May 29 and come in Gold, White and Black. There’s no official word on official pricing yet, but we’ve heard rumors that it’ll cost about $650, or roughly the same cost as the Samsung Galaxy S10e. That begs the question, which would you rather have? The Galaxy 10e with the flagship processor and smaller, but flat and higher resolution display, or the Galaxy A80 with the larger display and new camera module with higher resolution lenses? Hit us up on Twitter and let us know what you think.