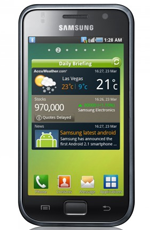 According to Korean IT Times, the Samsung Galaxy S will be rolling out to 110 countries around the world later this summer. Among the carriers expected to offer the handset are Orange (France), SingTel (Singapore), and Deutsche Telecom (Germany).  It has been previously reported that the big four providers in the United States are also on tap to carry the phone.  A massive rollout like this doesn’t happen all that often and this shows a tremendous amount of confidence in the device by the handset maker.

With Android 2.1, a 4-inch Super AMOLED display, and 5-megapixel camera, the Galaxy S can definitely take on the likes of the Droid Incredible and EVO 4G.  Are any of you guys and gals looking to pick one up when it arrives?