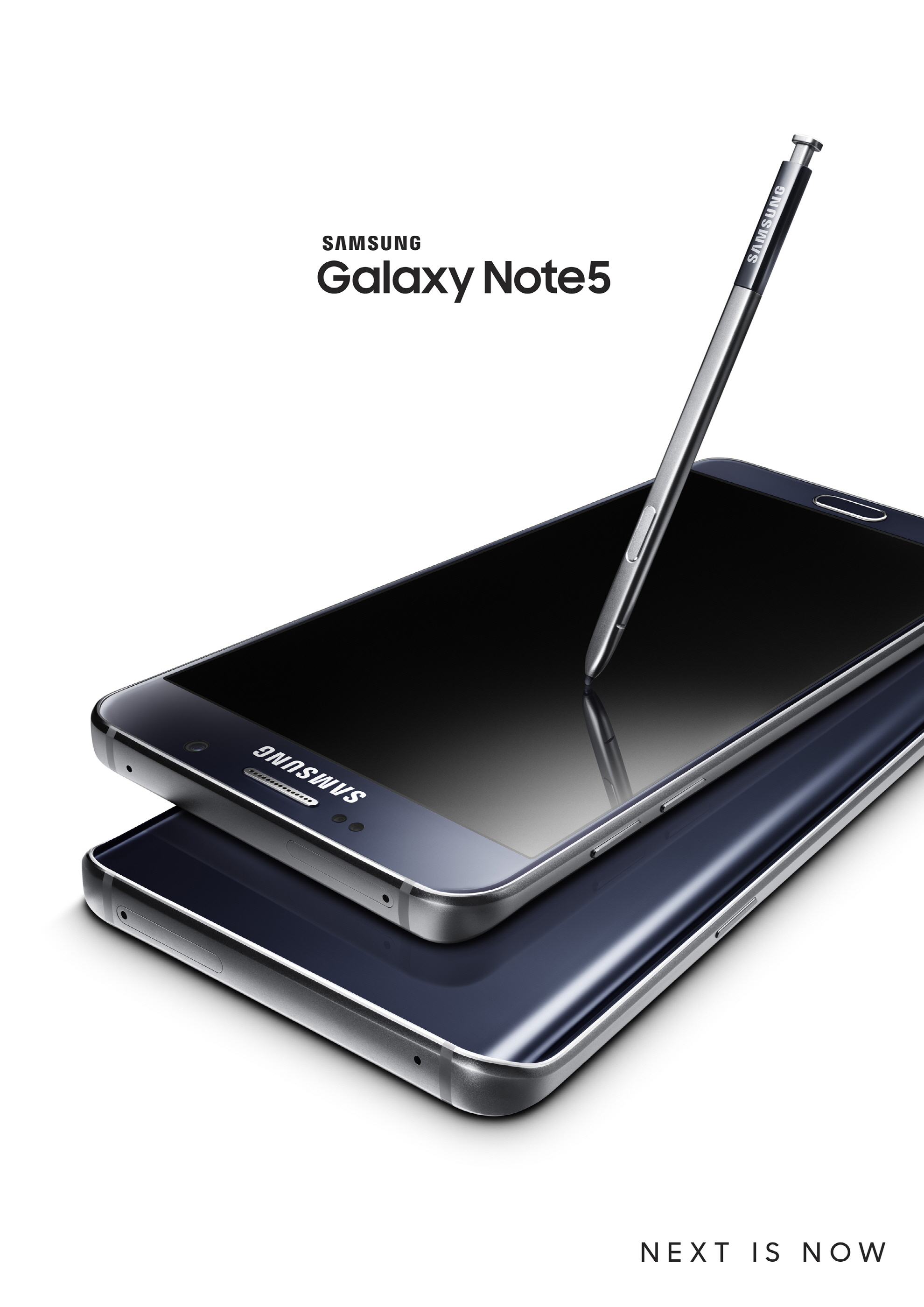 Samsung is definitely trying something new with the Note 5. I guess they weren’t satisfied with the Note 4 sales, and dramatically overhauled the design, as well as eliminating the device from Europe altogether. I honestly have no idea why Samsung would choose to eliminate the Note line from Europe, and I am sure this is quite disappointing to those who wish to buy the Note 5. Samsung claims they have been listening to the consumers, which means the consumers have been clamoring for a drastic change in the core of the Note line. And I guess consumers in Europe must hate the Note because Samsung doesn’t want to sell it to them anymore.

Anyways, the announcement has come and gone, and now it is time for a comparison.

From the live stream, the VP of Samsung mobile said they focused on making the device easier to hold, and making it easier to fit into people’s pants who wear “skinny jeans”. Man those people with skinny jeans sure have a loud voice because they brought about a design revolution in the Note series.

The most obvious change between the Note 4 and the Note 5 is the design and build. Samsung opted to go for a premium build in the Note 5 be removing all plastic and swapping it for curved glass on the back of the phone. They also improved the strength of the metal frame. Samsung claimed to make the Note 5 smaller than the Note 4, and they did but marginally. They shaved almost 2mm from the width, 1mm for the thickness, and reduced the weight by 5g(Note 4 weighs 176g and the Note 5 weighs 171g). I’m not sure how reducing the width by 2mm, and the thickness by 1mm helps those with skinny jeans, but I wear chubby jeans so I would need help with this analysis.

In terms of design, the Note 5 looks like a blown up version of the S6 with a stylus.

As good as it looks, I am not a fan of a glass back because it is one more piece that can shatter if it is dropped and even worse, glass will attract greasy fingerprints. The soft plastic back on the Note 4 was definitely a positive when it came to durability and eliminating fingerprints.

The Note 5 is a revolution in terms of design for the Note line. I think the Note 5 and the S6 both look great, but the Note 4 was not a bad looking device either.

Samsung made the decision to remove expandable memory from the Note 5, bucking the trend of what other manufacturers are offering. I really don’t understand this move and I certainly do not believe they were listening to consumers as all other flagship devices offer expandable memory including the 2015 Moto X.

The famous S Pen got a minor upgrade in how it is removed from the phone. Rather than using a fingernail to grasp the ridges at the bottom of the S Pen, like on the Note 4, Samsung added a spring loaded mechanism – now you push on the stylus and it will pop out.

In addition, Samsung continued its tradition of adding great features to the S Pen like writing on the device when the screen is off. This sounds cool, but writing without seeing is something that will be new to almost all of us. They also added “Write on PDF” which allows users to edit and annotate PDF documents using the S Pen. This sounds very useful if you deal with PDF files like I do. 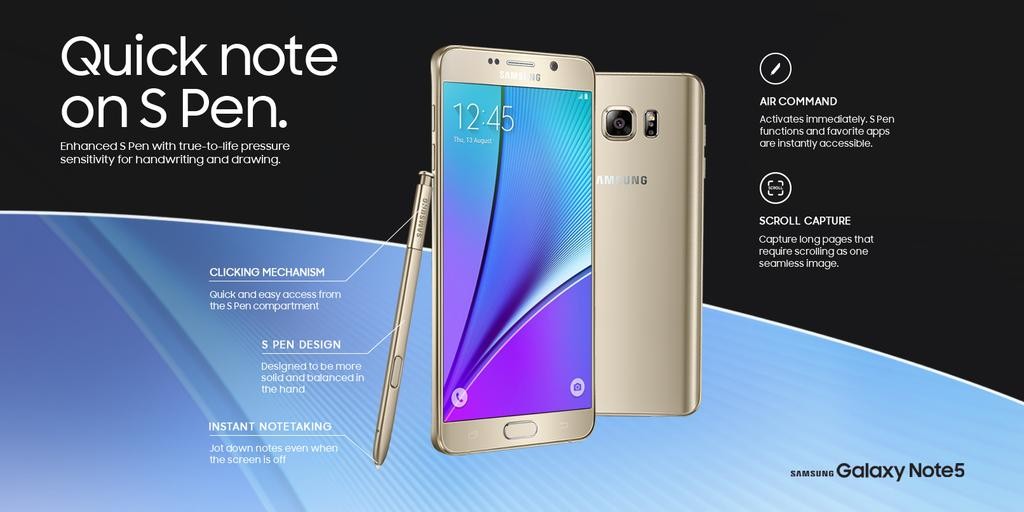 No iteration would go without an upgrade to the CPU, and the Note 5 did that by taking the processor from the S6 and putting it in the Note 5. The Note 3 and Note 4 both had better processors than their S counterparts, so this is a recent change for Samsung. Benchmark tests for the Samsung Exynos 7420 show that it is the top performing CPU at the moment, although by Note standards, having the same processor as the S6 is disappointing as Note users typically want more.

Although Samsung did upgrade the RAM to 4GB which should help with some of the additional features brought to the S Pen.

Both the CPU and RAM should provide a quality experience. Although the Note 4 is no slouch and still ranks near the top of benchmark tests.

The Note 4 display is fantastic. Samsung’s Super AMOLED display is the best display on the market. Contrast ratio and spectacular colors are something you just can’t appreciate until you see the display for yourself. The Note 5 maintained the Note 4’s display size of 5.7″, pixel density of 500+, and 2k resolution. Simply put, the display is the same and that is nothing to balk at. Samsung still maintains its lead on displays through the Note 4 AND Note 5.

As shown in Josh’s camera comparison test, the S6 camera is special. Samsung realized they hit the nail on the head with this camera and opted to put it in the Note 5. The camera comes as a 16MP shooter with optical image stabilization(OIS), and features a F/ 1.9 aperture which should help it take better low-light shots. The camera is also capable of shooting 4K video at 30fps, and 120fps for slow-motion. Samsung has bridged the gap between mobile devices and DSLR cameras. There really isn’t much need for a standard point-and-shoot camera these days if you can get your hands on the Note 5 camera.

The Note 4 also has a 16MP shooter with OIS, but doesn’t quite match up to the photo quality of the S6 and and Note 5. If Josh can get his hands on both Note devices, I would love to see a head to head comparison of photos between the two devices.

Sadly, this is one area where all fans will be disappointed. Samsung decided to shrink the Note 4’s 3220mAh battery down to 3000mAh for the Note 5. Samsung claims their new processor is much more energy efficient than the Snapdragon 805, which allowed them to shrink the battery. The Note 5 is rated at 21 hours of talk time whereas the Note 4 is rated at 20 hours. Regardless, Note users can never have enough power so this is a disappointment to see Samsung sacrifice .9mm in thickness for a smaller battery.

The bigger issue for most Note users is with the new design of a fixed back plate. Samsung allowed users to access their battery in the Note 4, which was a favorite for power users as all they needed to do was swap a battery to get back to 100% power. 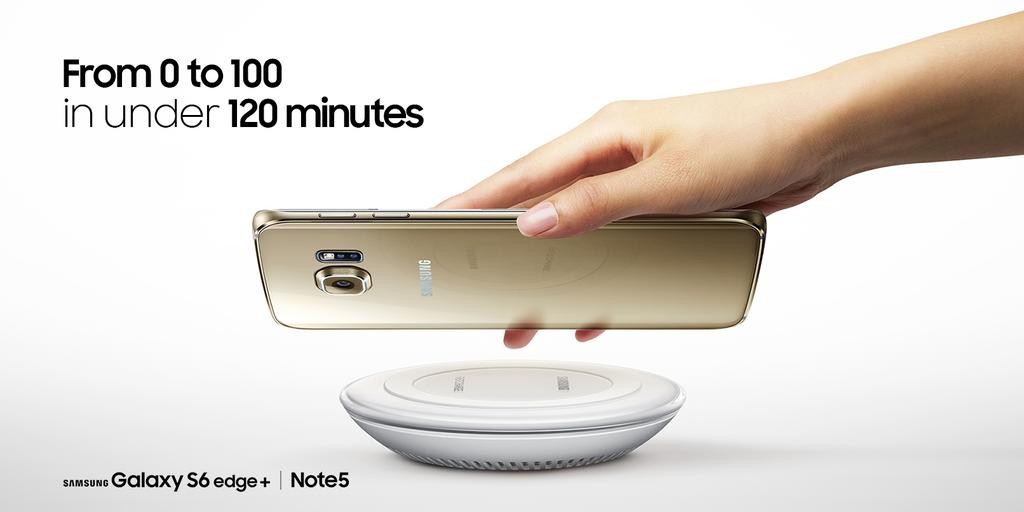 When I logged into the Androidguys chat group of writers, I noticed a few of them saying how they are excited about the new S6 Plus and the new Note 5. None of them are Samsung loyalists as they all use everything but Samsung, with exception to Josh Noriega who recently switched to the S6 Edge as his first Samsung device. Maybe Samsung is onto something by focusing on design over function. Those of us who have loved Samsung galaxy devices loved them for being different. We clamored over the ability to swap batteries, add SD cards, and things of that sort. Up until the Galaxy S6 Edge and now the Note 5, the writers I work with never really considered a Galaxy device.

The Galaxy Note 5 is nothing to sneeze at and it is one heck of a powerhouse. It comes with the fastest processor available today with 4GB of RAM running on Android 5.1. It is without a doubt a great phone, but not so much so when you compare it to the Note 4.

Even reading through early analysis on popular sites such as Engadget, I see that many people are excited for the Note 5 and S6 Plus, but I can tell you as an actual Samsung fan I am thoroughly disappointed. I feel unheard and unwanted by Samsung. If they can gain better profits and sales through a new customer base, then I applaud them for appeasing their shareholders. I can without a doubt say I care more about functionality over beauty. The sales numbers will speak for themselves and will prove Samsung right or wrong with their drastic changes in the Note line.

For the record, this is the Samsung Galaxy Note 5 I was hoping for.

Soundcore has another solid entry into the wireless earbud's market, the Spirit X2. If you're a workout junkie, you will love them. Here's our review.
Advertisements
Advertisements

Soundcore has another solid entry into the wireless earbud's market, the Spirit X2. If you're a workout junkie, you will love them. Here's our review.