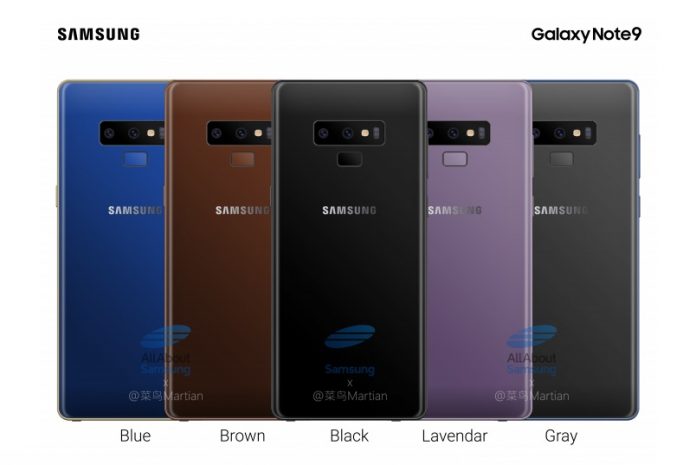 In a few months, Samsung will unleash upon the world yet another flagship. The Galaxy Note 9 will, according to the most recent rumors, will see the light of day in New York on August 9 during an Unpacked event.

As we’re drawing closer to the date, more and more leaks centering the upcoming smartphone have started emerging online. For example, we just heard the Note 9 will ship with a 4,000 mAh battery and now another leak reveals the colors the device will be available in.

You might remember the Galaxy S9 and Galaxy S9+ were announced in four different colors. Well according to the folks at AllAboutSamsung, the Galaxy Note 9 might get five colors.

Would you be interested in a Brown Galaxy Note 9?

Obviously, we’re going to see the classic Black version and also a darker Titanium Gray one. Another color option will be similar to the Lilac Purple of the Galaxy S9, albeit of a different share. It’s going to be called Lavender instead.  A darker blue model, which will apparently have a golden frame, is also in the cards. 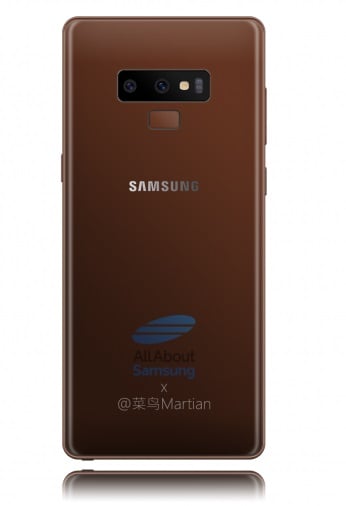 But perhaps the most intriguing color option is the Brown one. Remember the brown Galaxy II? Well now we might see the shade make a comeback on the Galaxy Note 9.

Yet before you get all excited, we should tell you that for the time being only the Black, Lavender and Gray variants are confirmed. But as was the case with the Gray Galaxy S9, the Gray Galaxy Note 9 will probably be limited to a few markets. And so will the Brown one, most likely.

The Galaxy Note 9 is rumored to make an appearance with a 6.4-inch display and upgraded internals. This means, a Snapdragon 845 on the inside, backed up 6GB of RAM and 128GB. A 256GB version might also be in the works. What’s more, the phone is expected to borrow the variable-aperture lens technology for its rear camera from the Galaxy S9.