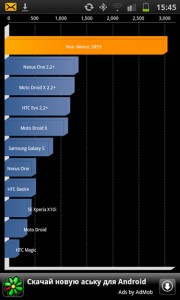 When Samsung launched the Galaxy S last year, it was known as one of the fastest phone available. The blazing fast 1 GHz Hummingbird processor blew everyone away, and the phone is still rocking the show. Now the successor of the phone is out, which was announced by Samsung at MWC this year and it’s known as Samsung Galaxy S2. Samsung Galaxy S2 seems to be an amazing and lightning fast device, and a Quadrant benchmark is proving it. The image above is actually an image of Quadrant benchmark test running on Galaxy S2, and you can see that it’s achieving a mind blowing score of 3,053, which is I think the highest score ever achieved on Quadrant.

As it’s a dual-core phone, so there is no comparison of this phone with single-core phones. But if you compare it with LG Optimus 2x, the Galaxy S2 is leading because Optimus 2x score is 2,958. That’s close but still not as high as this score.

Whatever processor the device is running on, it’s amazing, and I am pretty sure that this device will make a great breakthrough in the mobile market in few months. So who’s looking forward to Galaxy S2, anyone?

Keep in mind that this is different than the results we found with our own testing just last week.  We don’t know for certain what differences, if any, are under the hood of these devices.