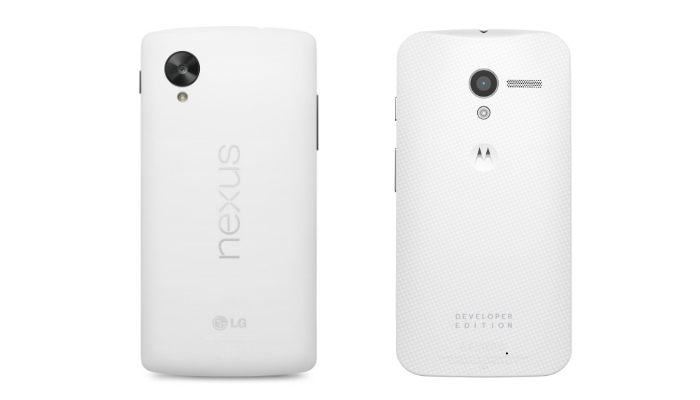 The Samsung Galaxy S5, introduced at Mobile World Congress 2014, will likely go on to become one of the top-selling Android smartphones of the year. And why not? It’s the latest in Samsung’s flagship line of devices and it’s better than ever. But, how does it fare when you compare it to other top smartphones of the day?

Let’s stack the Samsung Galaxy S5 up against another key Android handset, Motorola’s Moto X. We’ll take a look at how they match up in terms of hardware, yes, but we’ll also touch on some of the differences in software and user experience.

It doesn’t take a rocket scientist to understand the hardware differences in the two devices put the Galaxy S5 heads and tails over the Moto X. This makes a lot of sense when you consider how many months have passed since the Motorola smartphone debuted.

Samsung’s bigger, faster, and more powerful in nearly every sense of the word. But, does that mean you should rush out to buy it? Not really. Motorola’s phone is one of the best we’ve used in the last year and is more than adequate to suit the needs of your average customer. If you want the latest and greatest, Samsung is both of those. If you’re looking for something that works wonderfully and has mass appeal, Motorola becomes more attractive.

Let’s also not discount the fact that you can go to Motorola’s website and create a custom designed smartphone. It’s there you can mix and match colors for the front, back, buttons, and accents with thousands of possibilities. Samsung, for its part, will offer the Galaxy S5 in four color options at launch.

Based on pure specs, the Samsung Galaxy S5 has an edge over the Moto X. But, as many of you know, it’s not just megapixels that constitute a great camera. Suffice it to say, this is where Samsung pulls away with the lead. Features like the fastet-yet shutter speeds, HDR, and selective focus just add to the experience.  And, while we might not yet be able to take full advantage of it, the Galaxy S5 can record in video at 4K resolution. Should you have a TV or display capable of displaying that resolution then you’ll definitely be in business.

Indeed, the Samsung Galaxy S5’s water resistance is a nice touch this time around and helps protect the phone from life’s accidents and spills. It’s not quite ready to go swimming all day but a spilled glass of water is not the end of the world.

We also like that Samsung has opted for the USB 3.0 option in charging as it opens the door to added functionality. No, not every user will take advantage of it, but we like future proofing devices.

Fingerprint scanning is likely to find a place in most of the bleeding-edge smartphones going forward. It’s not a perfect tool, yet, and has limited capabilities. Samsung, for its part, is playing nice with the SDK and letting developers hardness the technology.

You know what else matters to a lot of users? Freebies and value-added bundles. To that end, Samsung is giving upward of $500 worth of apps and services away with each Galaxy S5. Not all stuff that every user will want or need, but it’s pretty darn appealing nonetheless.

On the opposite side of the coin, Motorola’s added few custom touches like Motorola Assist, Motorola Migrate, and Touchless Control. Each of these gets better with successive updates and provides value to the Moto X.

If there’s one thing that matters to heavy Android enthusiasts, it’s the software experience. While Samsung has added plenty of wonderful features, apps, and services, the edge still goes to the Motorola handset. That is, of course, if you care a great deal about timely upgrades and no carrier interference.

Motorola has impressed a great deal in the months that the Moto X has been out. Updates to Android are timely regardless of carrier and the phone is as current as it gets with 4.4.2 KitKat. Things are less certain down the road now that Google has sold Motorola to Lenovo. We’re cautiously optimistic that the phone will be supported just as well down the road, but won’t know for some time. On the other hand, the lack of bloatware of carrier-branded apps and services give us a reason to believe.

The Moto X is currently offered through Motorola for $399 (16GB) and $449 (32GB) in tons of color options. Pricing has yet to be determined for the Galaxy S5 but we’re thinking the $200 range is in order. The key difference, however, is that the Moto X does not require you commit to a two-year service agreement at that price. You can, of course, sign up for a contract with a host of carriers and get the phone for much cheaper – sometimes as low as a penny.

We expect that you’ll be able to procure an unlocked Galaxy S5 (and likely a Google Play Experience, too), but it will be in the order of hundreds more.

The Samsung Galaxy S5 will be sold starting in April in four color options and should be available through just about any carrier you can imagine. All of the major players are expected to sell the device as are a number prepaid arms.

Which is right for you?

Something should consider before purchasing any Android is whether you need to be on the cutting edge of software updates. Things have slowed on the overall platform front and features are coming at a slower pace. Truth be told, most smartphone users cannot identify the exact build of their OS or its respective code name. If you don’t know the difference between a Jelly Bean and a KitKat release then it should not bother you to go with a modified UI.

Average consumers are going to flock to the Samsung Galaxy S5. Those who are coming out of contract with their Galaxy S3 are looking at this device as a huge step forward. At this point there’s nothing to stop the Galaxy S5 train; others may slow it a bit, but it will be the top-seller of 2014. For great reason(s).

Motorola, on the other hand, is off to a great resurgence with the Moto X. We have had no problem recommending it to anyone and everyone. The battery life is out-of-this-world and the little Motorola touches give it a slight edge over stock Android. Shh, don’t tell the fanboys this, but we love the experience. It’s really hard to pass up the Moto X, especially if you can get it for a penny with a service agreement.

Note: Pieces of this post were excerpted from Samsung Galaxy S5 versus Nexus 5.