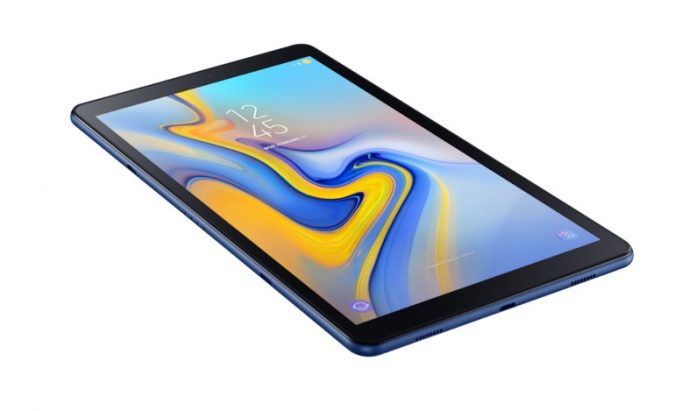 Upon introducing the premium new Galaxy Tab S4 tablet, Samsung also revealed the new Galaxy Tab A 10.5. This is a slate designed for the whole family which includes a bunch of features that will make media consumption more enjoyable for you.

The Galaxy Tab A 10.5 comes packing a 10.5-inch TFT display with 1920 x 1200 resolution with pretty slim bezels. Unlike Samsung’s previous models, the Tab A 10.5 does not feature a physical home button under the display. Nor does it have a fingerprint scanner or a face unlock feature. So how will you be to access your tablet, while keeping it safe from prying eyes at the same time? Well, you’ll have to rely on the more traditional PINs and passwords.

Samsung launches a quasi-budget tablet alongside the Galaxy Tab S4

The tablet is powered by a 1.8GHz Snapdragon 450 processor, backed up by 3GB of RAM and 32GB of storage. Samsung also throws in a microSD card slot for memory expansion up to 400GB. The slate is kept alive by a large 7,300 mAh battery. The product also includes an 8MP/5MP camera combo.

As we mentioned above, Samsung is marketing this device as a tablet is designed for entertainment. For that purpose, the device packs quad speakers with Dolby Atoms sounds.

Given that this a family tablet, the Tab A 10.5 also offers options for managing multiple family accounts including Kids Mode. Furthermore, it has an Always On Display Board that shows important information for the day like the weather forecast. At the same time, users will also be able to view photos in the background.