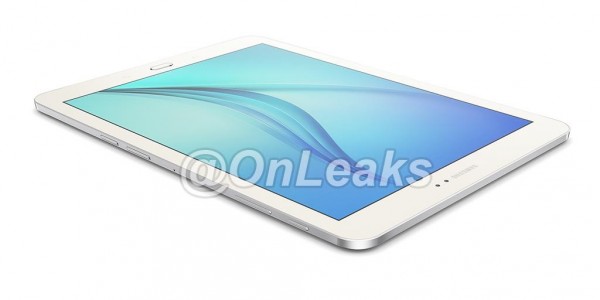 While the launch of the Samsung Galaxy Tab S2 is still a month away, its leaked images have already  revealed a chunk of its specifications including a metal chassis and a physical home button.

According to images revealed by leakster @OnLeaks on Twitter, the successor of the Galaxy Tab S shares a clear resemblance with the Galaxy Tab A. Also, it is apparent from the images that power and volume buttons are situated on the right hand side along with microSD and SIM-card slots. It is being said that the home button may double up as a fingerprint sensor.

No official launch date or information have emerged so far but the leaks suggest that the Galaxy Tab S2 will come in 8-inch and 9.7-inch variants. Both slates are rumoured to feature similar specifications such as 1536p Super AMOLED display, 64-bit octa-core Exynos processors and a duo of 8-megapixel rear camera and 2.1-megapixel selfie camera.

In the memory department, these tablets may come with 3GB RAM and 32GB of on-board storage with expandable memory via microsd. On the connectivity front, the Samsung Galaxy Tab S2 will have all the new age connectivity options including dual-SIM, Wi-Fi 802.11 ac/b/g/n, LTE Cat 6.  Running on Android 5.0 out of the box, the tablet may have some Wi-Fi only variants too.

Via: Android Central
Note: Select outbound links may include affiliate tracking codes and AndroidGuys may receive compensation for purchases. Read our policy. As an Amazon Associate we earn from qualifying purchases.

US Cellular announces launch dates and pricing for the 9.7″ Samsung Galaxy Tab S2