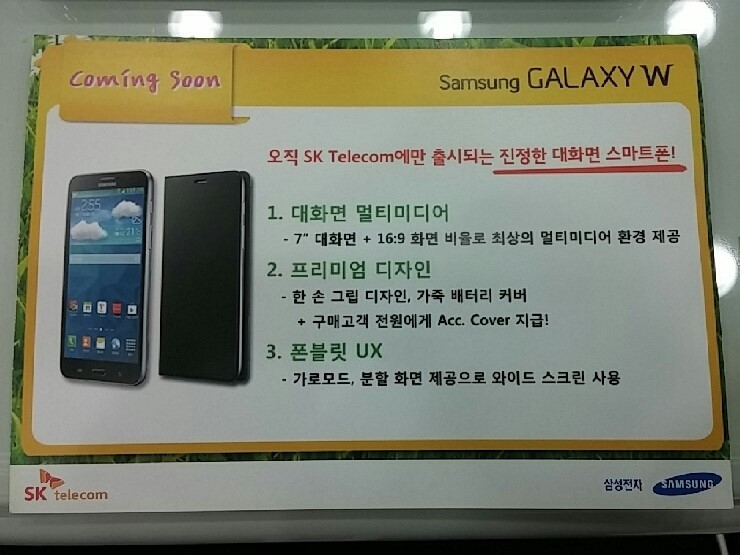 We all know that Samsung like to throw everything the come up with out there for people to try, what sells they stick with and continue selling what doesn’t they simply discontinue. One good example of that is the Galaxy Note line, which was a huge revelation back when the first Galaxy Note device was launched, people grew to like in a short period of time. They’ve been trying to do the same thing ever since.

I believe you all remember Galaxy Mega, a midrange phablet device that Samsung introduced about a year ago. Well, this recent leak reminds us of that devices. If recent leak from SamMobile is to be believed, Samsung is going to release a Galaxy W phablet that looks like every other Galaxy device and is going to sport a 7″ screen. I’m going to give you a moment to read that last sentence one more time, and no, we didn’t make a mistake when we wrote 7″ screen. Apparently Samsung is trying to sell us a 7″ device and call it a phablet instead of a tablet, considering 7″ is small tablet category. This device should sport a 720p screen, a 1.2GHz quad-core processor, 1.5GB of RAM, 8GB of storage expandable via microSD card and an 8MP camera. It should run Android 4.3 and not the latest iteration of Android 4.4 KitKat. A part of that Android 4.3 offering should be “Phoneblet UX” which will let you run 2 apps at once on your homescreen, although that just sounds like “Multi-Window” feature Samsung has been baking into their devices for a while now.

Maybe this device is a successor to Galaxy Mega and Galaxy W is just a codename, who knows. All we know is that this is going to be (if it ever sees the light of day) way too big for a smartphone or a phablet. The device should launch in South Korea as an SK Telecom exclusive, no word of it coming to Europe, U.S. or any other part of the world for that matter.