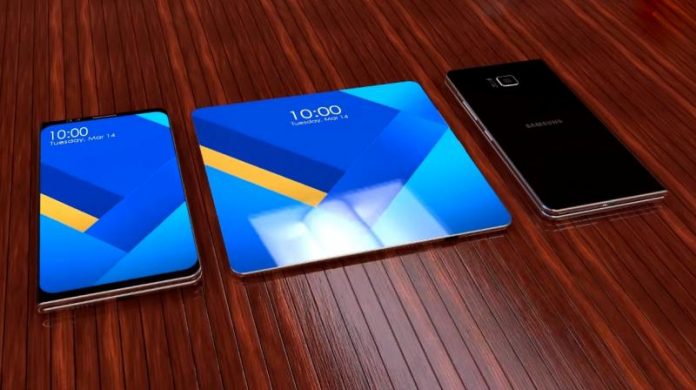 Samsung’s foldable Galaxy smartphone has been in the rumor mill for ages. The idea itself dates back to 2011 when the Korean tech giant launched a concept video of a fully bendable and transparent mobile device. During the same year, the Galaxy-maker created a new touch AMOLED display prototype that could be folded up to 100,000 times.

Samsung has been experimenting with the concept ever since. In mid-2015, word surfaced that the company was hard at work on an upcoming phone codenamed Project Valley that could be foldable.

Then later in 2015, an insider claimed the bendable phone (Project Valley or not) would see the light of day in January 2016. Which obviously didn’t happen.

Well in May 2016, Project Valley got a new name – the Samsung Galaxy X, which is believed to be the name under which the phone will actually launch.

Then 2017 came and in November we told you that a support page for the Galaxy X (model number SM-G888N0) has appeared on the official Samsung website, indicating an imminent release.

Yet, we’re already in the second half of 2018 and the Galaxy X has yet to show its face. But even if that’s the case, rumors centering Samsung’s upcoming foldable smartphone have been intensifying in the last few weeks.

Most recently, prolific leaker Ice Universe tweeted that the long-awaited foldable phone’s grand reveal will be made at CES 2019. Historically, Samsung has reserved the Las Vegas tradeshow for non-smartphone announcements.  For example, at CES 2014, the Korean tech giant launched the Galaxy Note Pro 12, a gigantic tablet with a pen.

Well if the rumors are true, Samsung will launch three flagships in 2019 and the first one, the bendable one, will see the light of day in January 2019. According to the same leaker, the Galaxy S10 will follow soon afterwards and will be revealed during MWC 2019.

What else do we know about the Galaxy X?

Industries sources talking to ITHome revealed that Samsung SDI, the company’s battery division has developed a curved battery with a capacity between 3,000 mAh and 6,000 mAh. This should be able to provide juice to the Galaxy X’s 7.3-inch OLED display. According to an insider, the panel can be folded down to 4.5-inches.

According to a report from GSM Arena dating back to January 2018, the front panel could also come with an Apple 3D Touch-like feature. This will allow users to get more contextual information the harder they press on the screen.

But will the Galaxy X fold in two or in three? If ETNews is to believe, Samsung’s phone will fold two-thirds of the way. That would leave a portion of the screen always visible, displaying the time or showing notifications without having to unfold the phone.

Apart from this, the Galaxy X should run a Snapdragon 845 processor. This is not at all surprising given its rumored launch date. The phone might also pack 6GB of RAM.

But perhaps the most shocking Galaxy X rumor of all is related to price. If Kim Jang-yeol, head of research at Golden Bridge Investment is correct, the Galaxy X will cost around $1830. This means Samsung’s upcoming flagship will be more expensive than the iPhone X itself!

Would you be interested in purchasing the Samsung Galaxy X if it launches with such a high price tag?