Rumors of a new vertically foldable Samsung phone have been gathering steam over the last few weeks. Thanks to a new leak from WinFuture, we now have a solid sense of what to expect in the forthcoming handset.

With seemingly official renders of the so-called Galaxy Z Flip, the report also sets forth hardware specifications, too. From the sound of things, the phone is more in line with an upper mid-range model — at least in terms of performance. But that’s not the compelling reason to buy this one, is it? 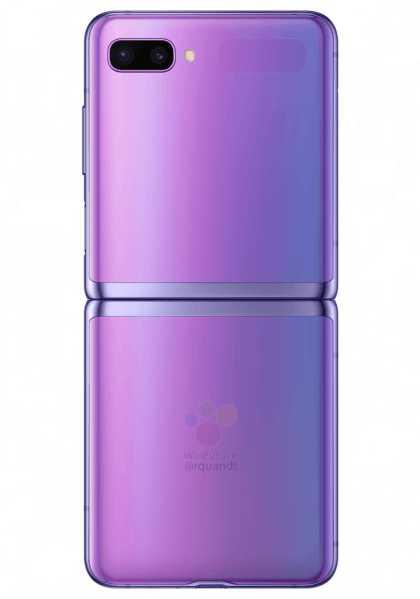 Details include a 6.7-inch foldable OLED display with a 2,636 x 1,080 pixel resolution and 22:9 aspect ratio. Unlike its sibling, the Galaxy Fold, the Galaxy Z Flip is said to feature an “ultra thin glass” display. Its predecessor relies on a plastic panel which is found to be rather fragile.

Similar to other recent Samsung phones, the Z Flip looks to have a centrally located hole-punch camera on the inside. A second display on the exterior figures to be a 1.06-inch 300 x 116 pixel OLED panel for displaying simple notifications and time.

Internally, the Galaxy Z Flip houses a Qualcomm Snapdragon 855 Plus processor with 8GB of RAM, and 256GB of storage.

Also present is a USB-C port for charging and audio. Indeed, that means no 3.5mm headphone jack. What else might be missing? There’s no microSD expansion card slot, nor is there support for 5G.

The Galaxy Z Flip is reported to feature three cameras with two on the outside (12-megapixel main and a 12-megapixel ultra wide angle) and a 10-megapixel camera on the inside. 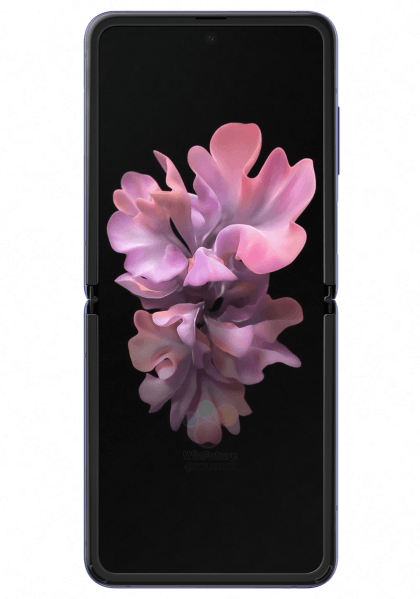 The main draw for the Galaxy Z Flip, and other foldable phones, is design. As the tech begins to take shape over 2020 and beyond, the price will surely drop; however, you’re paying a premium if you want to look cool.

Pricing and availability have not been confirmed, but a separate report from an XDA writer indicates we might look for a February 14 release and a $1,400 price tag. Also a possibility is an AT&T exclusive launch.