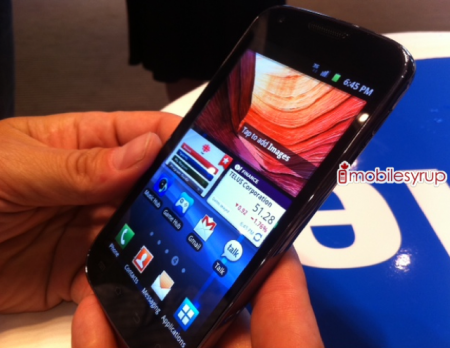 We first heard about the Samsung Hercules back in May when we saw a blurred sketch with details that T-Mobile would be offering a version of AT&T’s Infuse 4G.  As time has progressed, we’ve learned that this handset will closely resemble a large 4.5-inch variant in the lines of Samsung’s  Galaxy S II family.

Last night, Samsung and Telus held a concert in Canada and our friends over at Mobile Syrup happened to be there.  Thankfully, they took a few pictures of the handset you see above, something quite a few of us are looking forward to.  What you are looking at is the Canadian (Telus) version of the Samsung Hercules.

If you concentrate on the image, you will see that it’s missing the optical trackpad we saw on original SGSII.  In its place are the four traditional Android buttons.  While the original SGSII comes with a 4.27 inch display, the Hercules features with a 4.5 Inch display.

Yay for Telus!  What about T-Mobile?  The two carriers offer very similar Android products in the Nexus S and the Samsung Fascinate so it makes sense to expect T-Mobile will get this after all.

So our friends in Canada and also T-Mobile users in USA, are you excited about this upcoming Android monster? Tell us in the comment box below.