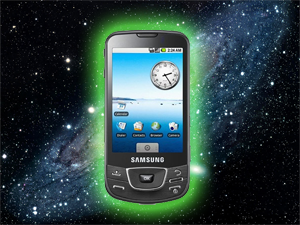 Bouygues Telecom announced today (translated French to English) that they will be the first company to offer the Samsung Galaxy. Formerly known as the i7500, the handset sports 8GBs memory, 5MP camera, 3.2″ AMOLED touch screen, and quad-band GSM support. After just passing through the FCC late last week, the Galaxy is widely expected to land on T-Mobile USA later this summer.

The name ‘Galaxy’ doesn’t come as much of a shock to us. As we pointed out last week, the previous codename was Capella. A quick search tells us that Capella is ‘a brilliant star in the constellation Auriga.’ The other recent handset to get a star-like codename is the Spica. Anyone wanna start guessing names for that one?