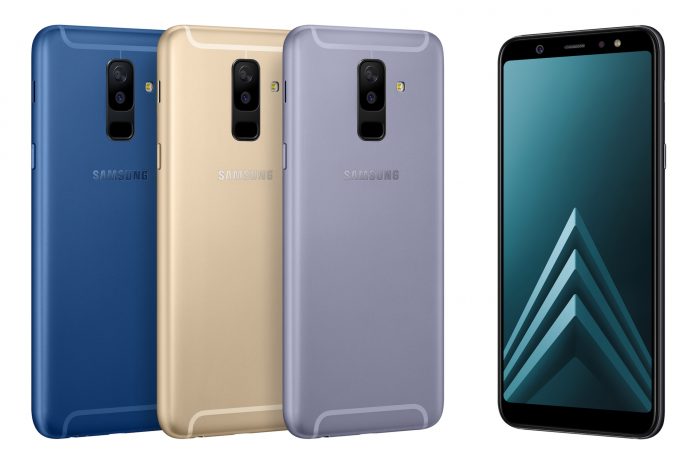 Both phones have metal housing instead of glass, and on the back are visible antenna lines. They also both sport the new 2:1 aspect ratio standard. Samsung’s more flagship notable features are on both devices as well, including Always-On display, App pairing, Bixby, and Samsung Pay (NFC Only though). With all that though, the primary focus of these phones are their great cameras.

The Galaxy A6 has a 5.6” HD+ (720p) Super AMOLED display with a 16MP front-facing camera and a 16MP rear-facing camera. Powering the screen is an octa-core processor and a 3000mAh battery. It also comes with either 3GB or 4GB RAM and 32GB or 64GB storage.

The Galaxy A6+ has dual rear cameras, sporting 16MP and 5MP lenses, capable of Samsung’s Live Focus effect. Behind the 6.0” FHD+ (1080p) Super AMOLED display is a ridiculous 24MP front-facing camera. Under the hood, we’ve got a stronger octa-core processor and a 3500mAh, with the same amount of RAM and storage.

While the phones will be available in early May, they aren’t scheduled for Northern American markets. First, they are coming to Europe, Latin America, and Northern Asia, then out globally elsewhere. Unfortunately, we weren’t given a price either; but what do you think of the Galaxy A6 family?

Samsung launches the mid-range Galaxy A6 and Galaxy Tab A 10.5 in the US