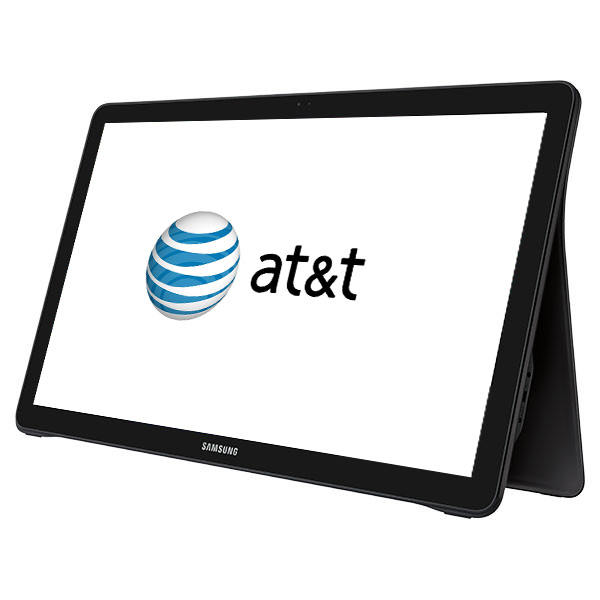 In case you didn’t know or you just forgot, once upon a time Samsung made a huge 18.4-inch Android tablet called the Galaxy View. This thing was so massive it had a permanently attached handle and weighed a little less than 6 pounds.

The handle was a large piece of angled plastic on the back which pivoted in the middle and added a lot of bulk. The tablet itself could never fully collapse, meaning it was only truly portable in a theoretical sense.

It seems Samsung thinks it is time for a refresh of this massive tablet, or at least AT&T is. According to sources that spoke to Android Police, Samsung is working on a 17.5-inch Android tablet for the mobile/media company. At 17.5 inches it is slightly smaller than the previous Galaxy View but not expected to be any more portable than the previous generation.

The new Galaxy View 2 is said to have a new book style hinge, which I can only hope will be a bit more compact than the last one. The new hinge will allow for two different positions. An upright position for watching videos and one at 30 degrees allowing you to use the tablet lying down. It seems the handle will not make a reappearance, perhaps Samsung realized after the first Galaxy View that this is more of a stationary device.

The new Galaxy View 2 is expected to run an Exynos processor much like the previous version with an increase of RAM from 2GB to 3GB. The screen will stick to the 1080p resolution of the previous generation which helps greatly with battery consumption on such a large screen. No word how large the battery will be, but it will charge through USB-C this time instead of a separate AC adapter.

Unfortunately, for all of you budding artists out there, the new Galaxy View will not include a stylus like Samsung’s other tablets. Which is a shame considering how large and nice of a drawing surface this would be. However, this is most likely going to be targeted as a media consumption device, instead of a media creation device. It will at least include a microSD card slot for expanding your storage.

AT&T is surely interested in this as a new way for you to consume DirecTV or content from their Time Warner acquisition. This makes sense, for when I reviewed the first Galaxy View I found it was most useful for using as a small TV while in the kitchen or playing games. It was not really built to be a laptop replacement and the lack of DeX or another OS would make it even more difficult to use as one.